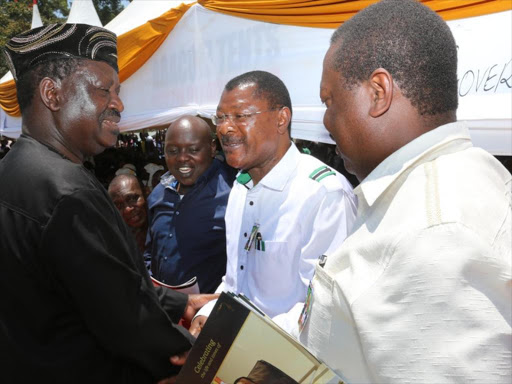 ODM leader Raila Odinga with Moses Wetang'ula and Musalia Mudavadi at the burial of Prof George Godia in Vihiga on Saturday, September 22, 2018. Looking on is Nandi Senator Kiprotich Cherargei.

Politicians from Western on Saturday differed with ODM leader Raila Odinga saying Kenyans would not have been burdened with the new taxes had he opposed it.

The issue featured during the burial of Kenya's UNESCO representative George Godia in Vihiga county. A number of politicians from the region were present.

"If we could stand firm as opposition, the Bill wouldn’t have passed." The legislator asked Raila to "come back to the opposition and lead them".

Amani party leader Musalia Mudavadi asked Raila not be afraid of being in the opposition.

"You don’t need to be in the government to become a president. The tide can change," Musalia said. He castigated Treasury CS Henry Rotich on the new tax measures.

The Amani leader said the CS has overburdened Kenyans by the new levies which were effected on Friday.

"I have been a Finance minister and can attest that Kenya is a candidate for debt rescheduling," Musalia said.

Ford Kenya's Moses Wetang'ula criticised the reduction of betting tax at a time Kenyans are being compelled to meet more obligations.

His sentiment was backed by former Senator Boni Khalwale who said the tax Bill would not have passed if Wetang'ula was still the Senate Minority leader.

"They are burning our taxes out there as Kenyans continue suffering in the face of high cost of living."

But when he spoke, Raila steered clear of the tax debate and defended his handshake with President Uhuru Kenyatta.

He said they were aware of the high cost of living but the country has to make progress for lasting unity and development.

Earlier, the ODM leader had told party members that the tax law was a product of the Building Bridges initiative for a better Kenya.

President Uhuru Kenyatta assented to the Bill on Friday, hours for the 73rd Session of the UN General Assembly.

Speaking later in Ugenya after the Vihiga funeral, Raila said they will campaign for zero taxation on fuel reached during the NASA parliamentary group meeting.

Post a comment
WATCH: The latest videos from the Star
by JOSEPH JAMENYA
News
23 September 2018 - 12:00
Read The E-Paper