Rejecting Uhuru's memo is like changing the Constitution - Muturi 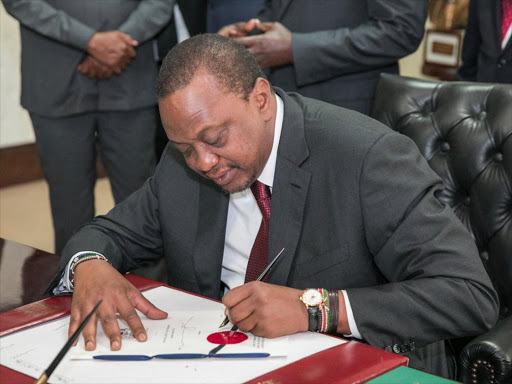 veto the President's memo is like changing the Constitution which requires ingenuity and tact, Speaker Justin Muturi has said.

Muturi was responding to lawyer Ahmednasir Abdullahi who said Muturi's watchful authority at the Parliament is questionable.

"Considering the many malfeasance committed by Parliament under the watchful authority of speaker Muturi...I take no pride in variously predicting the perilous trajectory he always puts our beloved country," Ahmednasir tweeted.

passage of law in one way or the other, entails strategy and numbers upon its proponents.

"...the Speaker's role is limited to over sighting, as per the Standing Orders..." he said.

A section Members of Parliament threatened to impeach the Speaker for allegedly imposing President Uhuru Kenatta's tax proposals on the House.

This was after tempers flared in the House amid accusations of betrayal as Muturi rammed through Uhuru’s memorandum on the Finance Bill.

For hours, MPs from both sides of the House chanted "Duale must go! Muturi must go!".

who asked him (Muturi) to be serious with his life.

"We expected better than that Muturi. And please, tell your MPs that whoever is talking about the Constitution as the problem in Kenya is either illiterate, semi illiterate or ignorant or all of the above," @PierreMutuku said.

User @Jeptoo_Jane said: "Mr Speaker, oversighting a rigged vote? You can't wiggle out of this one. Y'all - Speaker, NA Assembly leadership, Executive, ex-opposition - conspired against Kenyans."

"Power is temporary. How you bulldozed through the process was appalling. 'Maliza maliza, twende' style. Why not scrap the dubious galana-kulalu, rivatex (unsustainable) and other inflated projects?"

@martyneliani said "Kenyan voters like me will not forgive u soon."

"Thank you for availing me an opportunity to watch live how stealing a vote can be done on the floor of the august house. Mungu halali wala hali sima,"

You're to reign on MPs to sober up,you kind of rushed things to catch your flight to Juba. Remember Marende in times of intimidation from the then president and PM and chaos in parliament?"

He added "You suspend then take charge.Will you be part of our rich history?Am not a lawyer forgive if am wrong."

"The over-sighting must be free and fair. You clearly leaned on teh government's position. The corruption will one day catch up with you,"

@PeteroMaina said: "You have defiled our Constitution and Parliament. That's a sin that cannot be forgiven. You should resign immediately from your post as you lack credibility and respect expected from the Office that you hold."

The President signed into law

the Finance Bill, 2018, saying: "I give my commitment that I will ensure proper utilisation of public resources for a better Kenya. I will not relent on the war against corruption."

He announced this on Friday before flying to New York for the United Nations General Assembly.