Obado loved Sharon and couldn’t murder her, his lawyer protests 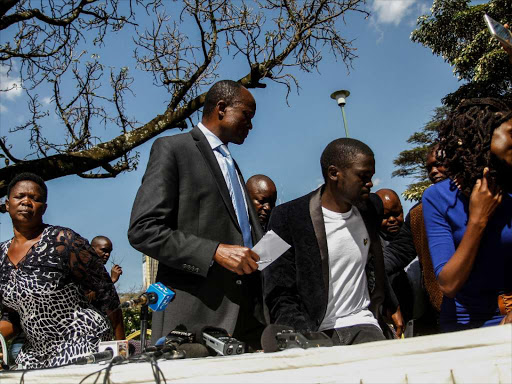 Governor Okoth Obado’s wife Hellen, the governor and children Jerry and Evelyn Okoth during a press conference in Nairobi on September 12 about the murder of his lover Sharon Otieno /ENOS TECHE

Migori governor Okoth Obado will be charged with the murder of Sharon Otieno, the Rongo University student who was carrying his baby and was slain three weeks ago.

Police investigators arrested the governor on Friday and will detain him until Monday when they will present them to court.

His lawyer Cliff Ombeta protested against the arrest and the decision by the DCI and the DPP to charge Obado, claiming it was done in response to public pressure.

Ombeta defended his client, saying he owned up to fathering the child and would not have murdered his love.

“It was an act of love on the governor’s part, but on the other side it’s an act of malice by the DCI and the DPP. We’ll fight them in court. They are destroying the career of an innocent person. They should be ashamed,” he said.

The two were arraigned in Kisii on Wednesday but were not allowed to plead to any charge after police were allowed to hold them for 10 more days.

On Tuesday, Obiero was detained after police impounded a car associated with him. The car is said to have been used to kidnap Sharon and Nation journalist Barack Oduor from Rongo town.

Jack Gombe - the driver of the vehicle, a dark Toyota Fielder - was arrested on Monday and arraigned in Oyugis. He will also be detained for 10 days to allow police to complete investigations.

On Friday, Obado arrived at the DCI headquarters at 10am to record a new statement after DNA results confirmed he was the father of the male baby stabbed in Sharon’s womb.

The county chief has denied any link to the murder of the 26-year-old t but admitted they were lovers.

Last week, Obado told the police in Kisumu that he too was interested in knowing Sharon’s killers.

Sharon’s body was found dumped in a thicket near Kodera Forest on September 5 after her abduction. She had been raped, tortured and mutilated

She had been in the company of Oduor who says he escaped from the hands of the abductors.