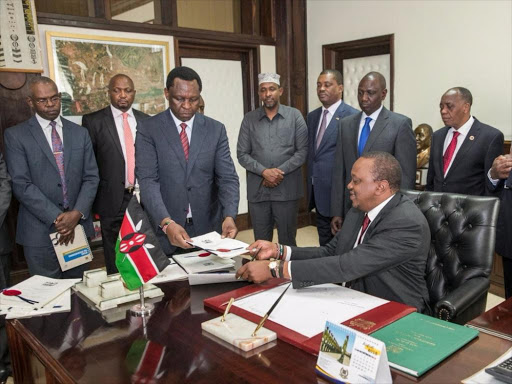 the Finance Bill 2018 that was a matter of contention in Parliament on Thursday evening.

"I give my commitment that I will ensure proper utilisation of public resources for a better Kenya. I will not relent on the war against Corruption," he said.

He announced this on Friday before flying to New York for the United Nations General Assembly.

The Bill, passed by the National Assembly, reflects the Uhuru’s recommendations for a reduction of VAT on petroleum products from 16 to 8 per cent among other amendments on various taxes.

Uhuru also signed into law the Coast Guard Bill 2018 which marks an important milestone in the management and enforcement of laws in Kenya’s internal and territorial waters.

The Coast Guard Act 2018 establishes the Kenya Coast Guard Service which will be responsible for enforcing maritime security and safety, pollution control and sanitation measures as well as prosecution of offenders.

The Coast Guard Service will also be responsible for port and coastal security, search and rescue, and the protection of maritime resources including fisheries.

The two Bills were presented to Uhuru for signing by National Assembly Speaker Justin Muturi.

This was after tempers flared in the House amid accusations of betrayal as Muturi on Thursday evening rammed through Uhuru’s memorandum on the Finance Bill.

The import of Thursday's chaotic and sometimes absurd proceedings is that taxpayers will start paying the eight per cent levy on petroleum products, down from the current 16 per cent that took effect on September 1.

There is also a reduction of taxes on betting and gaming while those in employment will pay a new levy of 1.5% to the Housing Fund.

For almost four hours MPs from both sides of the House chanted “Duale must go! Muturi must go!”.

Post a comment
WATCH: The latest videos from the Star
by NANCY AGUTU @nancyagutu
News
21 September 2018 - 09:00
Read The E-Paper