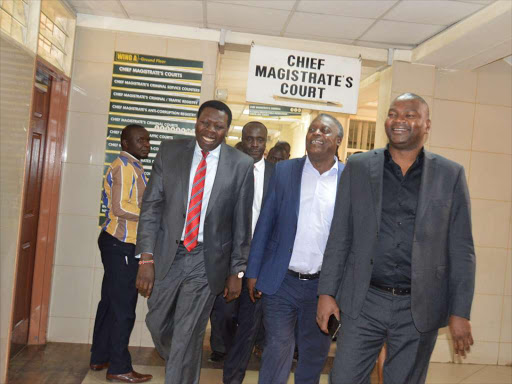 Jirongo was arrested on Tuesday for failing to pay a loan of Sh20 million owed to businessman Brian Yongo.

On Wednesday, the registrar ordered Jirongo to deposit Sh5 million cash and a bond of the same amount to secure his release by 1pm yesterday or risk going to remand.

“The DP was very kind enough to help us with his donation,” said Echesa yesterday.

Jirongo and Ruto have had a long association since their days in the ‘Youth for Kanu 92’, a lobby group that campaigned for former President Daniel Moi during the first multi-party election.

They later fell out. Yesterday Eugene deposited his Mercedes Benz car in court as surety for Jirongo.

Speaking to journalists after his release, Jirongo said even though he is not allowed to speak on the matter, the bail and bond terms given to him were very high considering this was a civil matter.

The registrar had given Jirongo less than 24 hours to raise the money or be transferred to Industrial Area prison until he complied with the courts orders.

Jirongo, through his lawyers, had raised concern about the huge amount that the court was asking for, claiming that he needed time to ask his friends for help.

The lawyers had pleaded with the court saying Jirongo is a public figure and is not a flight risk.

Yongo said he will not entertain any out-of-court settlement.

He had also objected to the application by Jirongo to be given up to Monday to look for the money.

Yongo allegedly loaned Jirongo Sh25 million between 2014 and 2015 but he only repaid Sh5 million.

The loan was supposed to be paid in three installments but Jirongo only paid once and never paid the rest.

Justice Olga Sewe of the commercial division said that Jirongo’s inability to repay was demonstrated. The money was to be repaid to businessman Sammy Kogo.

The judge ordered an official receiver be appointed as trustee for Jirongo’s estate.

Kogo, through his eight companies, petitioned the court seeking bankruptcy orders against the politician.

Jirongo had secured a loan from National Bank of Kenya using the businessman’s properties but failed to repay.

According to court papers, he was to make payments within 180 days from September 12, 2013.

The bank moved in and sold the properties held as security in 2009.

Jirongo entered an agreement to pay Sh700 million, being the value of the properties sold by the bank through a public auction.

He failed to honour the agreement within the stipulated period, causing the appropriator of the properties to institute court proceedings against him.

The bankruptcy order was granted on September 29. However, it was lifted in October, 2017.