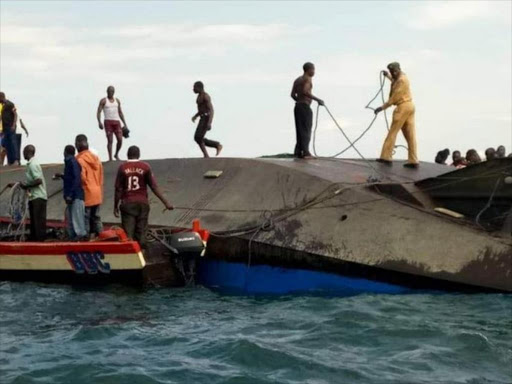 Rescuers at the point where MV Nyerere sunk in Tanzania's Lake Victoria on Thursday, September 20, 2018. /BBC

At least 136 bodies have been retrieved after a ferry sank on Lake Victoria, Tanzania's top police official Simon Sirro said on Friday.

He said scores more were still feared missing as rescuers searched for survivors on the morning after the disaster.

The ferry MV Nyerere capsized on Thursday afternoon just a few metres from the dock on Ukerewe, the lake's biggest island, which is part of Tanzania.

Initial estimates suggested that the ferry was carrying more than 300 people.

Thirty-seven people had been rescued from the sea, Jonathan Shana, the regional police commander for the port of Mwanza on the south coast of the lake told Reuters by phone on Friday.

Many are missing even as rescue efforts resumed on Friday after being halted overnight.

The MV Nyerere ferry overturned near Ukara island on its way from Bugorora.

It is thought the overloaded vessel tipped over when crowds on board moved to one side as it docked.

BBC's Aboubakar Famau in Tanzania says fear has gripped residents of the Mwanza region as they wait to hear the fate of relatives who travelled on the MV Nyerere on Thursday.

"I received a call telling me that I have lost my aunt, father and my younger brother," says Editha Josephat Magesa, a local resident.

"We are really saddened and urge the government to provide a new ferry because the old one was small and the population is big."

Our reporter says the ferry's engines were recently replaced after local MP Joseph Mkundi complained about the previous ones.

How did it happen?

Local media say the ferry's official capacity was 100 people, but officials say the vessel was carrying more than 400 passengers when it capsized.

It operates on a busy route, crossing eight times a day between the islands of Ukara and Ukwerewe, which are close to Tanzania's second-largest city of Mwanza.

The ferry was said to have been particularly busy because it was market day in Bugorora, on Ukerewe island.

The vessel was also carrying cargo, including bags of cement and maize, when it capsized around 50 metres from the shore.

It is thought that many of the passengers would not have been able to swim.

An official investigation will take place once rescue efforts to find survivors have ended.

So far, 40 people have been rescued and are in critical condition, according to Mwanza Regional Commissioner John Mongella. Local officials initially reported on Thursday that 100 people had been rescued.

Exact figures, though, are yet to be confirmed - Reuters said the person who dispensed tickets for the journey also died, with the machine recording the data lost.

Tanzania has seen a number of nautical disasters, with overcrowding often playing a role.

In 2012, at least 145 people died when a packed ferry sank while transporting people to the island of Zanzibar in the Indian Ocean.

The year before, almost 200 people died in another major incident off the coast of Zanzibar. Hundreds survived, some found clinging to mattresses and fridges.

In 1996, more than 800 people died when the MV Bukoba capsized on Lake Victoria. It was one of the the worst ferry disasters of the last century.

Post a comment
WATCH: The latest videos from the Star
by BBC and AGENCIES
News
21 September 2018 - 15:00
Read The E-Paper