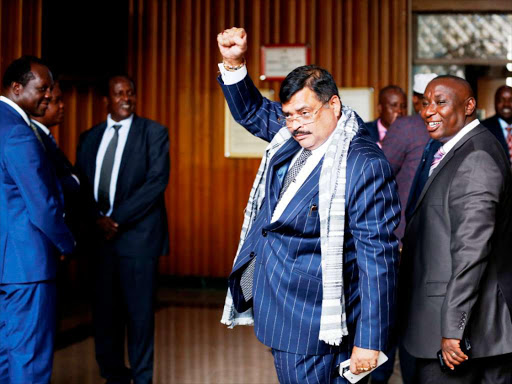 Tempers flared in the House amid accusations of betrayal as Speaker Justin Muturi last evening rammed through President Uhuru Kenyatta’s memorandum and a new Finance Bill.

The import of yesterday’s chaotic and sometimes absurd proceedings is that taxpayers will start paying the eight per cent levy on petroleum products, down from the current 16 per cent that took effect on September 1.

Uhuru is expected to sign the new Finance Bill into law before flying to New York for the United Nations General Assembly.

For almost four hours MPs from both sides of the House chanted “Duale must go! Muturi must go!” They also danced inside and outside the chamber after a dispute arose over an earlier vote that seemed to favour those opposed to the memorandum.

But their joy was short-lived.

When Muturi resumed his seat, he suspended the House for 15 minutes after the first vote — in which MPs had endorsed the proposal to effect eight per cent VAT on fuel products — was disputed.

Muturi said the screens in the House showed that 352 MPs were present, which is more than the 349 members.

He therefore suspended the House so that the ICT department could rectify the anomaly. When the House resumed, Muturi said he had looked at the official record of the House (Hansard) and it showed that those who took the first vote did not meet the two-thirds threshold.

When the MPs arrived in the House at 2.30pm it was clear that those opposed to the proposals had mobilised heavily and were determined to reject the President’s memo.

Majority leader Aden Duale escorted some MPs out of the chamber in his bid to cripple the House. They were joined by Minority leader John Mbadi and ODM chief Whip Junet Mohamed.

Earlier, there was confusion after the first vote was taken when Temporary Speaker Soipan Tunya called for a headcount to confirm if there were at least 233 MPs present for the division long after a question had been put and majority of MPs thundered ‘nay’.

This was a technical error because the Standing Orders require that the Speaker must first confirm the quorum — 233 members for constitutional votes and 50 members for ordinary sessions — before voting takes place.

The MPs walked into the chambers at 2.30 PM for the afternoon session but the House blew into full-blown chaos minutes past 3PM as the House settled down for business.

MPs pushing for zero-rating of VAT on petroleum products continued to shout ‘zero haki yet, zero haki yet’ as Temporary Speaker Tuya settled down for the committee of the whole House. MPs demonstrated unprecedented unity across the political divide, defying their party leaders as Ruaraka MP TJ Kajwang’ fired the first salvo on a point of order that apparently caught MPs off-guard.

The second-term lawmaker and lawyer and figurehead of the opposition to the bill warned of ‘a dangerous provision’ which he said gave Treasury CS Henry Rotich leeway to vary the VAT levy once passed by the House.

“Let me draw your attention to this curious provision. Once we pass this bill the Finance minister will have powers to vary the VAT from 8 per cent to 25 per cent. This is the truth and this is what members are voting for,” Kajwang’ said to the astonishment of the members who roared back, “zero, zero our right.”

“It is important that members know what you are voting for. It is such serious,” said Kajwang.

Earlier, members had shouted down Minority leader John Mbadi who spoke in support of the bill saying it was important to enable the Executive raise revue to meet development expenditure.

“Looking at the budget after repaying loans and recurrent expenditure, the government will remain with about Sh100 billion for development expenditure. I support this bill because it will not occasion a rise in prices of basic commodities,” said the Suba South MP. He was whoever heckled by agitated MPs who shouted at him, ‘traitor, traitor, Mbadi must go, Mbadi must go.”

Reminiscent of the 2015 session when security laws were passed in a similarly chaotic sitting, matters threated to get out of hand before Tuya put the question — meaning the vote was actually taking place.

Opposing MPs took selfies which they posted on their social media platforms to demonstrate to heir electorates that they were present to vote NO.

After she put the question and MPs responded, Duale was seen signaling a section of MPs to walk out of the chambers in a clear strategy to deny the plenary the 233 threshold required to overturn Uhuru’s memorandum.

This forced the Temporary Speaker to order the bell to be rung for five minutes before going for division (to vote),

resulting in a standoff that paralysed business for about 15 minutes.

“The nays have it because there are only 215 members in the House out of the 233 required,” Tuya ruled after the clerks took a head count.

However, MPs insisted that there were more than 233 present, accusing the clerks of rigging the vote. Shouts of ‘zero zero and Duale must go” rent the air once again.

When Muturi returned to the chair shouting match ensued as he ordered the doors to be opened to enable MPs outside to walk into the Chambers.

“Wa team mafisi, wa team mafisi,” shouted opponents of the bill as their colleagues made their way into the chambers.

Muturi, who was faced with a serious challenge to deliver a balanced ruling adjourned the session for over an hour while insisting that the vote would be repeated if it is found that there was an anomaly.

“The House must conduct its business in a manner that reflects decorum and dignity,” said Muturi to chants of ‘bado mapambano.”

Most hit was the ICT ministry which lost Sh5.9 billion followed by the school laptop programmes whose allocation was reduced by Sh5.5 billion.

Among the beneficiaries is the Judiciary which has received an additional allocation of Sh1.5 billion following last month’s outcry.

The budgets of the Ethics and Anti-Corruption Commission, National Intelligence Service, Office of the Director of Public Prosecution, Independent Electoral and Boundaries Commission and Judicial Service Commission remained intact.