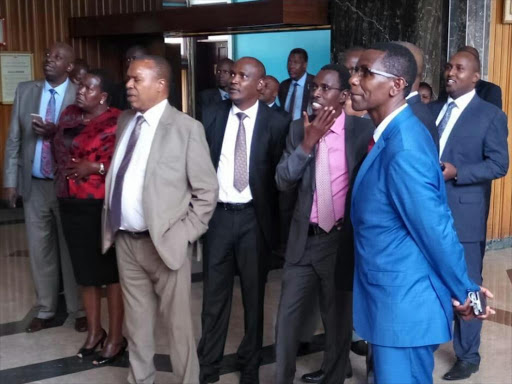 But the Speaker, who did not look disturbed by these noises, tried calming the lawmakers but the House could not agree into a consensus.

"Proceed... proceed.. but I can assure you that the House must conduct its business as required," Muturi said.

Muturi said Parliament was at

liberty to pick any position on a matter and the House must be guided by rules.

But as the speaker continued talking, the MPs continued shouting "Zero, Zero!"

"When the house is conducting business, the chair must confirm that there is requisite quorum. The figures that were given were disputed

by a section.. how can you complain that any member

walked out?" he posed.

"You will have to go by the rules... at any time when there is voting

must be attained. You will hold your horses and therefore for there ..you all know that walking out or in is."

As he gave the orders that the doors be opened, some MPs came in and those inside the chambers began singing how the MPs were betrayers.

"Wasaliti, nani...Wasaliti.. Wasaliti (traitors)" they chanted even as the speaker continued to calm the angered MPs.

This was after only 215 MPs remained in the House when the physical vote on the proposal was called.

The House was forced to go into division after those opposed to the proposal protested after the chair proclaimed that the Ayes had carried the day.

Kenyans struggling with a squeeze on living standards.