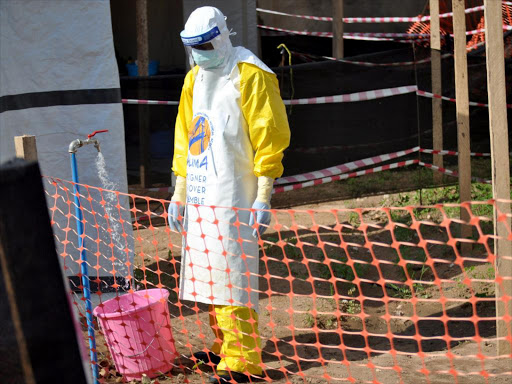 A medical worker wears a protective suit as he prepares to administer Ebola patient care at The Alliance for International Medical Action (ALIMA) treatment center in Beni, North Kivu province of the Democratic Republic of Congo September 6, 2018. /REUTERS

Some think the disease is a plot to kill off opposition voters. Others believe it is a money-making scheme by foreign groups.

These are among the rumours that have caused people to refuse Ebola vaccines and throw stones at health workers in eastern Democratic Republic of Congo, where an Ebola outbreak has killed almost 100 people since July, the Red Cross said.

By analysing hundreds of household surveys, the aid agency found three main theories about Ebola: that it is a political strategy, that it is a business, and that it is a curse.

Humanitarian workers hope a better understanding of these beliefs will help them gain trust, after Congo's health minister said that "community resistance is the first challenge to the response."

"Ebola is a terrifying disease, which creates fear and mistrust."

The outbreak is believed to have killed 97 people so far and infected another 45, according to the health ministry.

It is in an active conflict zone, where rebellion and ethnic killing have persisted since two civil wars in the late 1990s in which millions died, mostly from hunger and disease.

Many people do not understand why scores of foreigners flew in for Ebola, while other problems got little attention, said Ombretta Baggio, senior advisor for community engagement at the International Federation of Red Cross and Red Crescent Societies (IFRC).

"It's very important that we move away from the same old messages," she told the Thomson Reuters Foundation. "The population is very smart. They have specific questions."

Some have noted that the symptoms of Ebola resemble the effects of poison, she said. Others think it is suspicious that when most people go to the treatment centre, they die.

This outbreak differs from the one in West Africa in 2014-16 in that political theories are more common than supernatural ones, the Red Cross analysis showed.

Congo is in a tense period leading up to a December election to replace President Joseph Kabila, who has outstayed his mandate since 2016, and Ebola struck in an opposition zone.

Red Cross volunteers try to convey two key messages - that they care about their patients and are gaining nothing, Baggio said.

They also try to find the source of the rumours - sometimes local leaders or politicians - and work backwards from there.

"People need to find an explanation in their belief system," said Baggio. "It's not their fault."