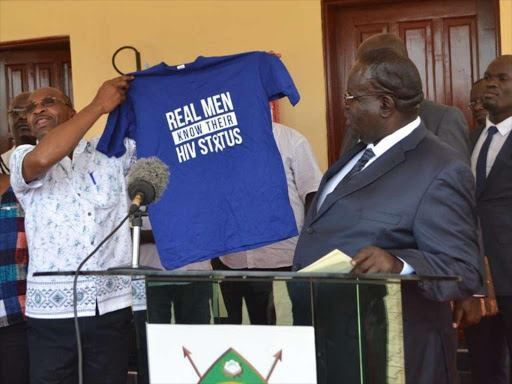 An anti-HIV crusader displays a T-shirt with a message that promotes testing for HIV in Homa Bay as Governor Cyprian Awiti looks on, February 9, 2018. /FILE

It has been a major

partner of the Homa Bay government in combating

new HIV infections, especially from a mother to her unborn child.

National Aids Control Council's data says Homa Bay leads with a HIV prevalence rate of 26.7 per cent in the country.

Jenipher Ndege, Homa Bay Health chief officer, wrote to the affected workers with instructions they should not to report to work after the end of this month.

"You are notified that your contract is ending on September 30, 2018. However, it will not be renewed because of budgetary constraints," reads part of the letter

"The Ministry of Health appreciates your valuable contribution in the service you have been providing during the contract period."

"Your efforts have gone a long way in improving the management of HIV/Aids among other health conditions," Ndege told the health workers.

of shortage of funds.

The foundation helped put up a