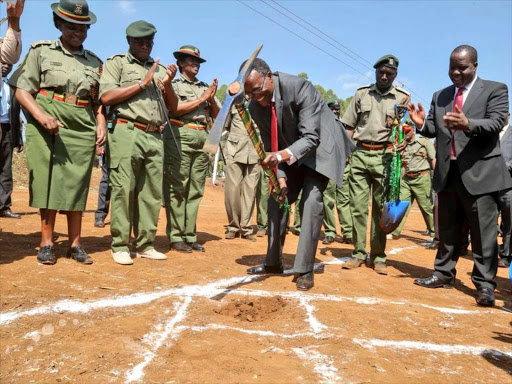 Chief Justice David Maraga during the ground breaking ceremony for the construction of a criminal court in Kahawa. Interior Cabinet Secretary Fred Matiang'i looks on. /COURTESY

Maraga on Monday said while the Judiciary strives to maintain its independence, it is ready to partner with the other investigative agencies to clear a

He spoke in Kahawa during the groundbreaking ceremony for the construction of a criminal court.

The CJ said following the President's resolve to crack the whip on graft, cases are increasing daily.

On Friday last week, Uhuru proposed additional funding for the judiciary, the Ethics and Anti-Corruption Commission, the Directorate of Criminal Investigations and the office of the Director of Public Prosecution.

He spoke during the State of the Nation address.

The Head of State said this will expedite graft cases.

“I want to thank the President for putting in a word for us to Treasury and Parliament to enhance our budgetary allocation to deal with corruption cases," Maraga said.

"The cases will be heard on a day-to-day basis. Suspects have nothing to worry about because the law will be followed. Where there is no evidence, the accused will the acquitted and where there is evidence, we will convict appropriately."

He said the Judiciary has been experiencing delays in prosecuting criminal cases because the prison services do not present remandees on time.

However, Maraga said they cannot be blamed because they face logistical problems of transporting the suspects to courts.

He said the Kahawa

court will be a major milestone in easing congestion in other courts and prosecuting of criminal cases in Kiambu and other areas.

Maraga said in the near future, all minor cases will be decriminalised and

suspects will do community service.