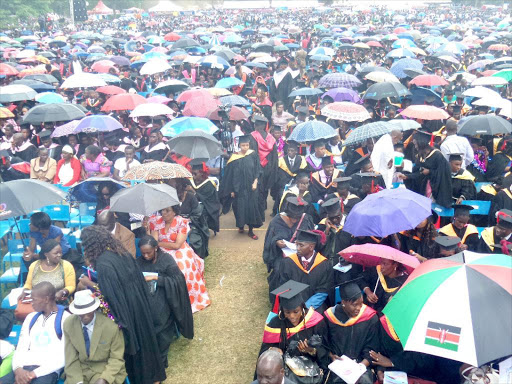 NO RAIN ON THIS PARADE: An aerial view of Graduation Square. Photo/PATRICK VIDIJA

At least a third of MPs lack bachelor's degrees. Details that have been made public show a peculiar mad dash for post-secondary qualifications between 2012 and 2017.

This means that up to 116 MPs have either a diploma or a certificate.

The academic qualifications of the 349 members of the National Assembly published on Parliament’s official website show some lawmakers with certificates enrolled for and graduated with bachelor's degrees.

The law that required MPs to have a degree was shelved in 2017 and will come into force in 2022.

The law proposed by the electoral commission and passed in 2016 required aspirants for MP and Senate seats in 2017 to have a degree, just like their governor counterparts.

It also proposed that MCA aspirants hold a diploma to run in the 2017 election and a degree for the 2022 polls.

Currently the law requires the President, deputy president, governors and deputy governors to hold a degree but is silent on the other elective seats.

In 2016 the Commission on the Implementation of the Constitution said in its final report that MCAs' low academic qualifications were to blame for the poor laws they made.

The details published for the first time yesterday show most MPs bypassed acquiring a diploma and enrolled for degree courses in overseas universities with questionable reputations.

Before they were sworn in, MPs were asked to provide their CVs to enable Parliament establish a database of their qualifications. This was seen as a bold step by MPs to open up for public scrutiny.

The data, aimed at enabling voters to know their leaders, show some lawmakers who finished high school in the early 1990s developed a sudden appetite for higher education in the run-up to the last two general elections.

According to the data, about 10 lawmakers are enrolled for PhD courses, while most are pursuing their master’s degrees.

Most of the certificates were acquired in the run-up to the 2013 and 2017 general elections, when most aspirants faced the possibility of being locked out by the IEBC for lack of academic papers.

Most politicians enrolled in local colleges and some universities in Uganda.

The IEBC, then led by Issack Hassan, had drafted far-reaching proposals to raise the bar of qualifications for aspiring lawmakers. However, the push was foiled in Parliament, paving the way for non-graduates to run for election.

The IEBC proposal followed concerns over the low quality of legislation that was being churned out by Parliament, with governance experts arguing that better academic grades would enhance lawmakers’ capacity.

The Independent Electoral and Boundaries Commission had in 2011 made sweeping proposals to the Elections Act to make it mandatory for MPs and MCAs to have degrees in the 2013 general election.

However, MPs successfully lobbied then President Mwai Kibaki and Prime Minister Raila Odinga to suspend the enactment of the law until after the 11th Parliament.

MPs in the tenth Parliament changed the law at the last minute before going to the polls and lowered the academic requirements, exempting candidates for both Houses of Parliament and county assemblies from holding degrees.

Some of them were serving their third term but had not gone past secondary school or primary school.

Then Minority Whip Thomas Mwadeghu argued that MPs needed higher qualifications to be effective in performing their roles.

“As the country develops, it would be good to have MPs who are more conversant with complex issues, who have a wide scope of world affairs. I don’t know any other way of achieving this but the intention is not to cast aspersion on anybody,” he said after claims emerged that some long-serving members argued they would be disadvantaged.

The provision was dropped and MPs and MCAs were only required to produce any post-secondary certificate earned after studying for at least three months.

In the run-up to the 2017 polls, MPs voted to provide for a transitional clause in the Elections Act to make it mandatory for those seeking the positions in 2022 to have degrees.

During the special sitting in December 2016 Majority leader Aden Duale said the new amendments would give members at least five years to go back to school.

MPs passed the amendment without any debate. They amended the law to also make it mandatory for aspirants for member of county assembly (MCA) to hold degrees.