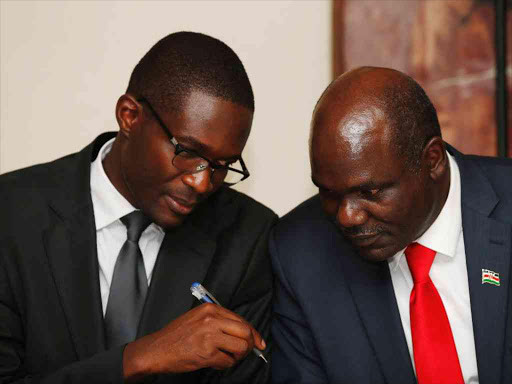 IEBC Chairman Wafula Chebukati (R) confers with the CEO Ezra Chiloba at the press conference in Nairobi where they announced the cancellation of the registration of voters in the diaspora who are outside Africa on February 7, 2017. Photo/Jack Owuor

Suspended IEBC CEO Ezra Chiloba's personal assistant Abednego Ominde has been arrested following an attempt to sneak out files from the commission offices.

Ominde was arrested alongside the IEBC acting finance director Agatha Wahome at the basement parking while in possession of the files.

It is said the 14 files were from the Finance and Procurement departments. The Nairobi area DCIO is handling the matter.

Nairobi Central OCPD Robinson Thuku said: "It is true we have two individuals who were brought from IEBC over claims of stealing."

been tense amid a quorum hitch occasioned by the exit of four commissioners.

Maina and Mwachanya attempted to in the wake of an August 10 ruling which held that they did not follow due process while quitting.

Chiloba was first suspended on April 9 and later on June 15 after the CEO sought to resume work hours after he was reinstated by the Employment and Relations Court.

The IEBC chair, in effecting the suspension, cited vetting of procurement officers which was on June 1.

"The commission has resolved to suspend you (Chiloba) with immediate effect pending the audit of all major procurements relating to the August 8 general elections and the repeat elections held on October 26, 2017," Chebukati said then.