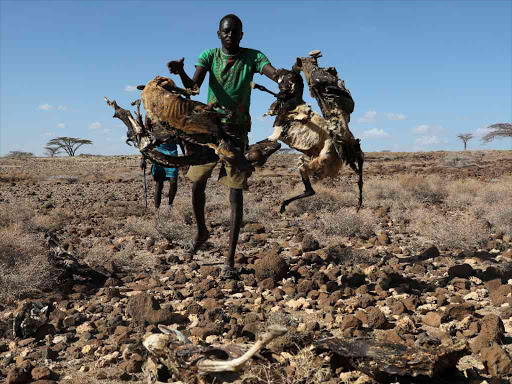 A UN report on the State of Food Security and Nutrition says drought and floods have contributed to hunger in Kenya and Africa. Food insecurity, inadequate access to nutrient-rich foods, high disease prevalence and poor sanitation are among factors that prompt malnutrition.

Northern Kenyan has been cited as a region with severe malnutrition due to prolonged drought.

The report says, “For those whose livelihoods depend on livestock, climate shocks can lead to depleted income and food resources due to loss of animals, milk production and trade.” Many livestock diseases such as the Rift Valley Fever outbreak in 2006-07 can be linked to extreme climate.

RVF outbreaks and patterns are closely associated with shifts from El Niño to La Niña. In East Africa, more than half of El Niño occurrences have been accompanied by corresponding RVF outbreaks. The RVF outbreak in Northeastern killed more than 420,000 sheep and goats.

The projected milk losses were estimated to be more than 2.5 million litres due to abortions in cattle and camels. Kenya also faced severe food crisis between 2011-12 during the East Africa drought.

The UN report further says the drought combined with rising global food prices led to the collapse of livelihoods for 9.5 million people. Small-scale farmers who produce 69 per cent of the country’s food are listed among those most vulnerable to climatic shocks.

The climatic variations hurt farmers as they have less food for consumption and sale.

The issue is a core feature in catalysing economic growth, and is a principal constituent in perpetrating judicious governance. Indeed, there would not be a better time than now to provide impetus to the concern of food security.

The prevalent global financial crisis has constrained the availability of capital at a time when greater investment is urgently needed in the agriculture segment. World economies continue to opt for alternative capital ventures in a bid to achieve greater per capita income in favour of per capita calorie consumption. It is justified to infer that economic success should not be defined by the price of food but by the provision of adequate and nutritious food for the people