Cop among three killed in protests over death of Kisii tout 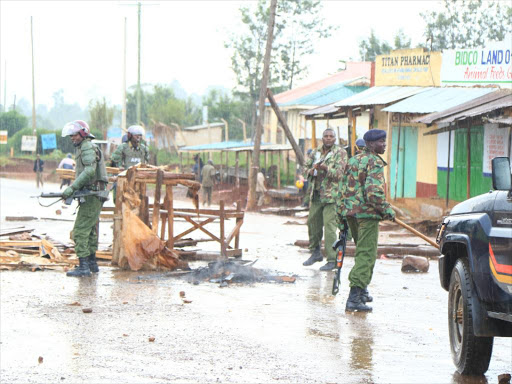 Police remove barricades on Kenyenya – Etago road after residents protested the killing of a tout on Wednesday, September 12, 2018. /ANGWENYI GICHANA

A police officer was among three people killed during protests at Kenyenya market in Kisii county on Wednesday.

The policeman, a matatu conductor, and a boda boda rider died in the clash between police officers and touts at the town.

The protesters were enraged by the alleged killing of a bus conductor by a police officer at a roadblock.

They engaged the officers in running battles which lasted several hours, paralysing transport and business along Kisii-Etago road.

The said crew member was allegedly hit by a gun butt after their vehicle failed to stop after it was waved down by police.

A primary school pupil was shot during the chaos and is undergoing treatment at Kisii Teaching and Referral Hospital.

Those who died were identified as Paul Omare - the conductor, and Hesbon Onkoba - the boda boda operator.

The name of the officer is yet to be established.

The policeman was overpowered and hacked to death after reportedly running out of bullets at Kerongorori river.

He said two more police officers were injured adding that an investigation into the incident was ongoing.

The boda boda rider was shot dead by police, according to witnesses.

Governor James Ongwae condemned the incident and called for calm, a call that was reiterated by other leaders from the county.

"This is clearly is an unfortunate incident because Kisii people are peace-loving. We expect police to behave professionally and exercise some restraint."

He said this in a statement which was also signed by deputy governor Joash Maangi.

Bomachoge Chache MP Alfah Miruka said: "It's shocking that the same people who are supposed to enforce the law have become lawbreakers."

Area MP Zadoc Ogutu said a security meeting will be held at Kenyenya on Thursday to get into the root of the matter.

"I register my deepest condolences for the lives lost and pray for the schoolboy successful operation to remove the bullet from his body."

He added: "There is no shortcut. Killers will face the law. Let us remain calm as justice will have to be served," he added.

Post a comment
WATCH: The latest videos from the Star
by ANGWENYI GICHANA
News
12 September 2018 - 18:00
Read The E-Paper