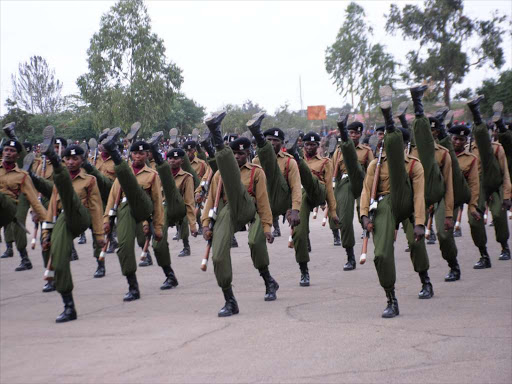 Administration police perform a silent drill during their pass out parade at their Embakasi APTC. /FILE

Although dissolution of the Administration Police would require a constitutional amendment, those crafting the new changes have decided to implement administrative actions that will effectively see the AP “swallowed”.

President Uhuru Kenyatta is expected to announce the changes on Wednesday this week when he addresses the President's Summit that brings together all county police chiefs and county commissioners.

National Police Service spokesman Charles Owino confirmed the Wednesday meeting but could not be drawn into discussing the details. The changes are expected to take effect soon after their unveiling by the President.

On July 27, Kenyatta gave Matiang'i 30 days to produce a strategy on how to improve efficiency and effectiveness in the National Police Service.

Uhuru also asked Matiang'i and Inspector General Joseph Boinnet to address the persistent housing problem and report back within the period.

“I have directed Matiang'i and Boinnet to provide me with a comprehensive policy framework and strategy," Uhuru said via Twitter.

The Star has seen the new outlay which will drastically change the command and structure of policing in the country with the the AP getting clearly defined roles.

The AP will be merged with the Anti-Stock Theft Unit (ASTU).

According to the changes majority of the AP officers will be absorbed into the Kenya Police Service. The few that will remain will have their duties redefined. They will mainly revolve around providing security to government buildings and facilities such as SGR, the ports of entry and other critical facilities.

AP camps and chief’s camps where majority of the APs are stationed will be gazetted as police stations. The regular police, DCI and APs housed in the same facilities will be under a single command.

This means positions such as county or regional AP commander will be abolished and their holders redeployed to police stations to work alongside regular and DCI officers.

The new look AP service will be lean as majority of the officers will be redeployed to the general duties under the command of Deputy IG Edward Mbugua. The position of DIG in charge of the AP and the top level command will remain intact.

Established units of the AP, such as the Border Patrol Unit and Anti-Stock Theft Unit, will be brought under one command.

This will be the first time in the history that officers from the AP will be deployed to police stations and those in the regular police or DCI also deployed to specialized AP units.

In all the 47 counties, AP officers and those in the general duties will be merged and put under the command of a senior officer to be referred to as the county police commander.

In the past, APs have been reporting to their boss in the area of jurisdiction while general duty officers reported to their boss respectively.

ASTU, which is charged with handling livestock theft will also undergo a major transformation. The officers will be merged with those in AP departments of Rural Border Patrol (RBPU) to form one unit responsible for border patrols.

This unit will undertake all major police operations, including troubled areas such as Boni Forest.

The unit will also be responsible for securing all government installations and facilities such as airports and railways.

The two-day meeting at the Kenya School of Government will be attended by all senior police commanders from Kenya Police Service, AP as well as DCI.

All the county commissioners will also attend the meeting.

The proposed changes have caused apprehension, especially in the AP, where senior officers fear they will lose their positions of influence in the new police command.

Currently, both RBPU and ASTU have separate commanders. But under the new arrangement, either of them will have to be be moved, said a senior police officer familiar with the proposed changes.

According to the architects of the changes, the changes are aimed at increasing efficiency and prudent use of resources in security management.

The proposed changes received lukewarm support from county commissioners who attended the last meeting at the KSG where the matter was discussed.

The county chiefs want the AP officers to remain under their command. In the old order, DCs, PCs and even chiefs had policemen attached to them and were responsible for supervising and deploying the officers under them.

In the new regime, there will be no AP officers attached to the county and sub-county commissioners who are now left with the function of chairing security meetings in their areas of command.