Judge stops VAT as Kenyans ask: Where is Uhuru? 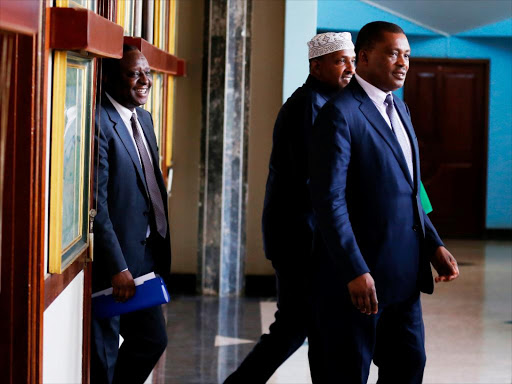 But they got a temporary reprieve when its implementation was suspended by the High Court in Bungoma temporarily to allow time for the President to assent to or reject the Bill.

The judge further ordered that the matter be mentioned on September 12, 2018, at the High Court in Kisumu.

The President who travelled to Beijing last week for the China-Africa summit that ended on Tuesday has not returned to the country. Reports indicated he had stopped over in Dubai but his itinerary was not announced by his communication team as is tradition.

Acting State House spokesperson Kanze Dena was out of communication most of yesterday.

Uhuru’s return has eagerly been awaited by Kenyans with the hope that he will trigger suspension of the tax which took effect automatically on September 1 by operation of the law. Parliament had voted for its suspension until 2020 in the Finance Bill but the President is yet to assent to or reject it.

In Bungoma, lawyer Ken Amondi on behalf of a lobby group from Kisumu

that Treasury Cabinet Secretary Henry Rotich had flouted core constitutional principles and values in levying the tax that has caused a public outcry.

Amid rising pressure, National Assembly Speaker Justin Muturi chaired a meeting of heads in the Executive yesterday to find a solution to the emerging crisis. It was attended by Treasury Cabinet Secretary Henry Rotich, Attorney General Paul Kihara, Solicitor General

The tax was first introduced on kerosene, diesel, petrol and jet fuel in the Value Added Tax Act of 2013, with a three-year grace period. It would have been effected in 2016.

But lawmakers in the 11th Parliament voted to defer its introduction to September 1, 2018.

During the debate on the Finance Bill 2018 last week, Parliament unanimously voted for an amendment moved by Minority Whip Junet Mohamed to suspend the tax for another two years.

However, Rotich proceeded to authorise implementation of the tax from last Saturday, amid hue and cry over the high cost of living.

The vote was seen as a blow to government efforts to raise revenue through higher taxes to service its debt and finance its development agenda.

The tax was imposed subsequent to conditions set by the International Monetary to reduce borrowing and raise revenues locally.

In March, IMF approved Kenya’s request for a 6-month extension of the stand-by arrangement to allow additional time to complete the outstanding reviews of its monetary policy.

IMF approved the $1.5 billion facility on March 14, 2016, for a period of 24 months. It is precautionary insurance that Kenya could draw on should the economy be in distress.

Although the facility was to expire on March 14, 2018, IMF revealed that the credit had been suspended mid-last year before expiry date because Kenya had failed to meet the agreed fiscal deficit reduction targets.

Yesterday police had to be called in to force transporters on go slow to pick fuel.

A contingent of General Service Unit police flushed out dealers staging protests at a fuel depot in Industrial Area.

The wholesalers under Kenya Independent Petroleum Distributors Association (Kipeda) had vowed to disrupt the distribution of fuel to protest the (VAT).

The police cleared the barricades and forced transporters to fill trucks

before they were escorted out of the Industrial Area depot as the government moved to allay the biting fuel shortage in the country.

Citing section 85 of the Energy Act (2006, the Electricity Regulatory Commission Wednesday suspended the Kipeda Holdings Limited licence over what it described as economic sabotage.

According to ERC, the firm was behind an elaborate intimidation scheme that has seen fuel transporters stage a strike over the implementation of the VAT on petroleum products. The strike triggered fuel shortages in Nairobi and Mombasa.

Muturi assured Kenyans that the matter will be resolved in due course and appealed for patience.

“This was just the first meeting but I want to assure you that going forward, we will be able to address the concerns of Kenyans. We were just trying to address the issue of fuel prices. Work is in progress,” Muturi said.

Rotich said: “We have started consultations today with a view of solving the issue at hand. We will hold a series of meetings until we get a solution. Out of these meetings, we will inform Kenyans accordingly on the progress.”

Deputy President William Ruto had assured Kenyans that the Executive would work with Parliament to resolve the rising fuel cost in the country, while Nasa leader Raila Odinga said Uhuru would revisit the issue.

Ruto said a balance would be struck between the government’s development plans and the need to cushion the public against price increases.

“The Executive will be meeting Parliament so as to address the concerns raised by Kenyans. As a matter of fact, a solution will be reached,” Ruto said.

Post a comment
WATCH: The latest videos from the Star
by David Makali
News
07 September 2018 - 06:00
Read The E-Paper