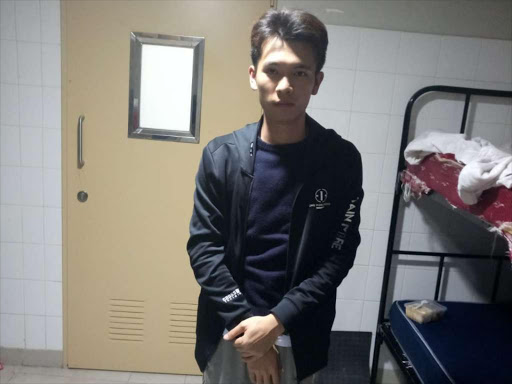 Chinese Liu Jiaqi at JKIA after he was arrested on Wednesday 6, 2018. /COURTESY

The Chinese Embassy in Nairobi has distanced itself from comments by one of its citizens Liu Jiagi referring to President Uhuru Kenyatta and other Kenyans as monkeys.

Spokesman Zhang Gang said the remarks do not represent the views of a majority of the Chinese people in the country.

Liu Jiaqi was arrested on Wednesday and deported on Thursday. He was secretly recorded by a worker he had threatened to sack from his motorcycle shop.

In the video that has gone viral on social

Jiaqi is heard saying Kenyans including the President are monkeys.

"The personal talk and personal feeling of this young man does not represent the views of the vast majority of Chinese people. The Chinese Embassy always requires the Chinese companies and individuals to abide by the local law, stay and work legally in Kenya, making a positive contribution to the friendship and cooperation between China and Kenya," Gang said in a statement.

In the clip, the trader brags that there is nothing that poor, black, smelly Kenyans can do to him even he sacks the said employee.

He said the Kenyans he was referring to includes the President.

He said Kenyans are stupid.

The employee is heard protest about unfair treatment, but the Chinese interrupts him, saying it is because he is Kenyan.

"Everyone, every Kenyan is like a monkey. Even Uhuru Kenyatta, all of them," Liu says.

"I don’t like you monkey people, [you] smell bad and you are foolish and black."

The embassy said the video was captured in June at Jiaqi's shop in Ruiru where he sells motorcycles.

Liu says all he wanted in Kenya was to make money.

A Twitter user identified as Mark Cuban said Liu should first meet the wrath of Kenyans before being deported.

“We want to meet him at Ngara and have a little chat about his experience in Kenya,” he said.

@leemakwiny referring to the Chinese national as an illegal immigrant said he should be kicked out of the country.

“We can not be a country where Chinese come to hawk spare parts and insult us,” he tweeted.

Captain Machuka said the authorities are underperforming with his deportation.

Twitter user Gole Kibet suggested to the President to call a press conference at State House and announce the country was no longer repaying the Chinese loans.

(You cant speak rudely and still expect me to repay your loan. Liu Jiaqi’s insults have paid for it. Ala!)

George Kingola questioned why the government was deporting Liu instead of prosecuting him for a crime committed within Kenya's territory.

@Syombuak noted the insults by the businessman is part of the rot among Chinese nationals many African countries are complaining about.

This is not the first time Chinese nationals are being blamed for being racist.

They were accused of mistreating SGR Kenyan workers back in July.

“We should use "Liu Jiaqi" incident as basis to default on Chinese loans,” Kiplangat Duncan said.

Don NevaVeli suggested he should be given at least give a cup of tea with a lot of sugar that consists of Lead and Mercury.

Joshua Njenga said Liu Jiaqi made his point as this was what most Chinese workers in the country think of Kenyans.

“Why punish one honest Chinese for speaking his mind? “ he posed. “ It's we who lowered our national pride by making our country a walk-in-walk-out destination for all manner of Chinese.”

However, Anthony Tito said Liu is just a victim of a set up adding Kenya had people who speak worse of other tribes and they are walking free.

Ching Li said the Chinese have for a long time abused and mistreated Kenyans adding the same energy of bitterness towards Liu should be directed towards Kenyans who abuse and discriminate on tribal grounds.

“Not the West, Arabs or Asians they all see as shitholes,” said Michael Chai. “The decision to deport instead of jailing proves it further.”

Christ Ambassador urged all Kenyans who are working with racially abusive Chinese to expose them.

Liu is currently being processed by the authorities for his deportation.

Responding on the matter, the Chinese embassy in Nairobi distanced itself from the comments saying they

do not represent the views of the vast majority of Chinese people in the country.