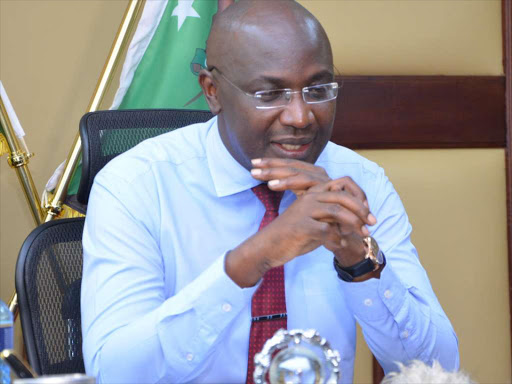 Bungoma governor Wyclife Wangamati speaks to the press in his office during a past event. /FILE

The fate of other nominees who accepted their posts hangs in the balance following petitions.

Ng'ang'a rejected the offer because of poor pay and Fungututi said he has other commitments.

Residents in Bungoma and pressure groups have petitioned the assembly to halt vetting of nominees until the law is followed.

Good governance consultant Peter Khakina and the Ogiek community have written to the assembly seeking the annul the appointments.

Dr Khakina argued the selections fail the regional balance test. He said some sub-counties were sidelined.

"According Governor Wangamati's appointments on August 29, Kimilili, Kanduyi, Bumula, Mount Elgon and Tongaren have two nominees each. Webuye West and Webuye East have one each while Sirisia and Kabuchai have none," read the petition.

The governor was faulted for appointing one deputy chief of Staff, one liaison officer, one public relations officer, eight advisors, and three members to the Service Delivery Unit in his office, which was against the law.

Khakina said appointing many officials will increase the wage bill. The Ogiek complained that minority communities and the two-thirds gender rule were ignored.