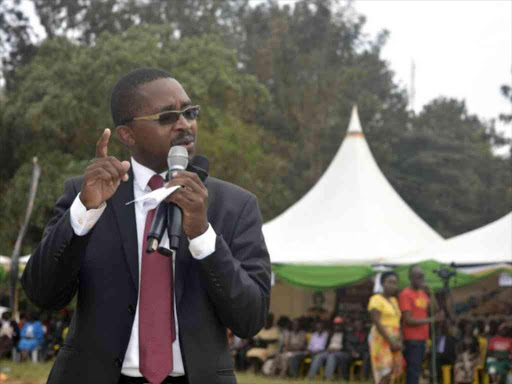 Legislators from Murang’a have appealed to Governor Mwangi wa Iria to solve the water crisis in the county with speed.

The leaders, speaking at Kigumo Bendera grounds during a Huduma Mashinani event, said the water sector is too sensitive and should be handled with care.

They castigated confrontations between the county government and Murang’a Water and Sanitation Company (Muwasco).

Whereas Wa Iria has maintained that the county will be running the water company, officials led by chairman Peter Munga said they won't allow such interference.

The row between the two entities, which escalated on Monday, led to the disconnection of water supply to Murang’a town.

The MPs expressed concerns that the fights have tainted the image of the county and appealed for conclusive talks between the two parties.

Chege said differences between the governor and the water company officials should be ironed out in a sober manner.

The MP said the confrontations have put the county on the spot countrywide and attracted unwanted publicity.

"Let the two sit down and decide on who is supposed to be providing water to residents," she said.

Wahome said the governor should find a way of working with the water companies to increase water connections above the current 40 per cent.

The MP said though water is a devolved function, Wa Iria should bring all stakeholders on board to chart the way forward.

The wrangles, she noted, will hinder the county’s bid to ensure all homes have piped water.

Waithera said the county requires proper strategies for expanding water connections instead of the emerging issues.

The water row has prompted protests amongst residents and Muwasco workers.

This followed an announcement by the governor over the county's and absorb staff in county payroll.

Wa Iria had earlier gazetted the appointment of Joseph Kimura as the Interim chairperson of Muwasco, retiring the former Equity Bank chairman with immediate effect.

Munga, however, obtained court orders barring the governor from implementing the gazette notice and interfering with the operations of the water company.