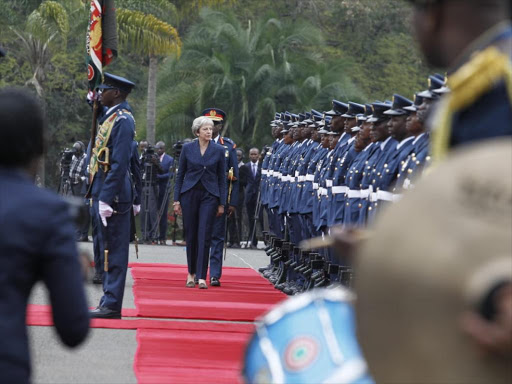 British Prime Minister Theresa May was honoured with a 19-gun salute upon arrival at State House, Nairobi on Thursday.

She inspected a guard of honour ahead of her bilateral talks with the host President Uhuru Kenyatta.

May was received by Uhuru and DP William Ruto before the deafening sounds of the fired cannons rented the air.

National anthems for the two countries were played as the two leaders prepared to inspect the guard of honour.

May is the first British PM to visit Kenya in 30 years since Margaret Thatcher toured in 1988.

She marched to the tune being played by the State House band.

Dressed in a blue suit, the UK leader put her left foot first before moving the right one accompanied by guards.

The PM arrived at State House at about 11:15 am and was received by the president under tight security.

May landed at the Jomo Kenyatta International Airport at about 6.30am on Thursday where she was received by officials from the Foreign Affairs ministry.

No movement was allowed within the State House vicinity moments after her arrival.

The band entertained those present with tunes of Fadhili Williams "Malaika".

Some of the issues to be addressed are foreign policy, trade and investment, tourism, and military support.

Uhuru will seek to strengthen its trade ties with the UK as it is the second most important export destination.

The visiting PM and the President will then head to the Humanitarian Support Centre at the Embakasi Garrison at 2.30pm.

The two heads of State will then convene at Strathmore University at 3:30 pm for Kenya-UK business forum.