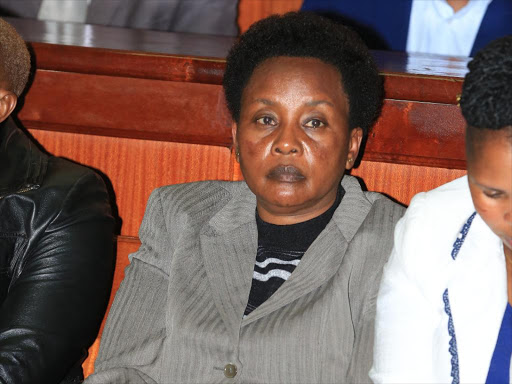 Judicial staff who spoke to the Star yesterday, asking not to be named, said they felt targeted and would 'fight to defend the independence of the Judiciary'.

"If they can treat her that way, who are we? We are less powerful. It means they can find anything and force us out of the office," one angry judge said.

They spoke as it emerged that Chief Justice David Maraga has called an urgent Judicial Service Commission meeting this morning to discuss the unfolding events that riveted the nation and caused an uproar.

discuss the legality of process of Justice Mwilu's arrest, what

and the commission's role in the process, among other

things. The meeting is to begin at the Supreme Court at 7am.

Mwilu, who is yet to take a plea, is expected to attend the meeting, ensuring the quorum of six as required by the law.

The High Court yesterday temporarily halted criminal proceedings against Mwilu who was arrested on Tuesday and charged on suspicion of corruption, abuse of office, failure to pay taxes and improper dealings with Imperial Bank.

Mwilu was charged on Tuesday evening, hours after being arrested, and released on a personal bond of Sh5 million.

In the current anti-graft onslaught, DPP Noordin Haji has so far brought criminal charges against dozens of high-profile public servants and business people.

The detention of the Deputy Chief Justice is the highest profile case so far. The DCJ in the Judiciary is the equivalent of the Deputy President in the Executive.

The dramatic arrest of Mwilu has divided the country divided, in contrast with the solid public backing that the apparently relentless graft crackdown initially appeared to enjoy.

For the first time since President Uhuru Kenyatta kicked off the purge, there is disquiet and doubt about the motives in Mwilu's prosecution.

The Lady Justice was among four judges of the apex court that nullified Uhuru's re-election in September last year and stood out for asking probing and unsettling questions.

On Tuesday, Opposition boss Raila Odinga's ODM party — which has been a critical supporter of the graft war — questioned the sincerity of Mwilu's prosecution.

ODM secretary general Edwin Sifuna claimed that her arrest could be part of the Jubilee strategy to punish Supreme Court Judges for nullifying Uhuru's election.

"The long winding statement he [the DPP] gave justifying his action against the DCJ did not inspire much confidence. He must now speedily conclude this prosecution, remembering always that Kenyans shall not forgive him should this turn out to be a politically instigated witch-hunt," he said.

The battery of pro-bono Opposition-allied lawyers lined up to defend Mwilu is a clear signal that the prosecution has touched a nerve.

Previous criminal conduct against judges have been handled by the Judicial Service Commission.

The JSC handled the Sh200 million bribery allegations against Justice Philip Tunoi and abuse of office charges against former DCJ Nancy Barasa. She had pinched a guard's nose.

Neither Tunoi nor Barasa were subjected to criminal trials.

Most of the charges against Mwilu elates to offenses allegedly committed long before she rose through the ranks to the top court.

During her vetting, Mwilu got a clean bill of health from the Directorate of Criminal Investigations and the Ethics and Anti-Corruption Commission.

Her only hurdle was a petition filed by ex-Kandara MP Alice Wahome who alleged that Mwilu was corrupt and should be allowed on the apex court.

"Her integrity, moral character and impartiality do not meet the threshold outlined in the Constitution," Wahome said.

The Justice and Legal Affairs Committee that was vetting Mwilu disagreed, dismissed Wahome's objections and cleared her.

Economist David Ndii has alleged that the prosecution of Mwilu is part of the Executive's plot to influence succession in the Judiciary.

Njoki Ndung'u was fiercely opposed to nullification of Uhuru's win. She read the minority opinion.

to retire in three years before the 2022 polls where the Supreme Court could be presented with another presidential petition.

If Maraga retires, Mwilu would take over in acting capacity, putting her in pole position to be come the first woman president of the Supreme Court.

Figures in the legal fraternity, including lawyers,

judges and magistrates, expressed varied opinions. While some were worried, others said the DCJ should 'carry her own cross'.

One judge said that if the charges are proper ,there is

nothing wrong with charging her, but if the motives are sinister, then judges have reason to be worried.

"It is worrying. Shivers are being sent down the spines of judicial officers, which

is worrying," he said.

A magistrate asked if judicial officers can be treated so

contemptuously, then why should they toil so hard.

Court clerks and judicial staff at the Milimani law courts were elated that the High Court had halted the DCJ's prosecution. Many attended to show solitary.

One man, who didn't want to be named for fear of reprisal,called the matter "a total witch-hunt".