Five Egyptians seized for being in Homa Bay illegally 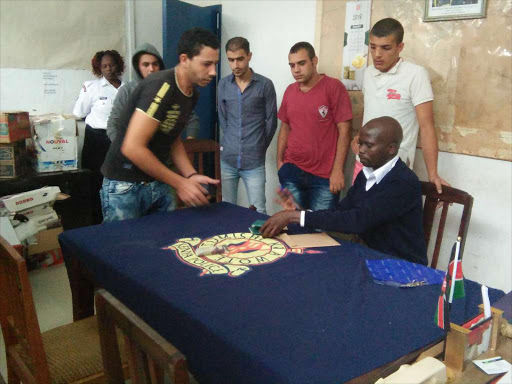 Police in Homa Bay on Wednesday arrested five Egyptians for being in Kenya illegally and operating businesses without permits.

Eight cartons containing kitchenware, they are alleged to have been selling, were

Speaking to journalists in his office, Homa Bay County Police Commander Marius Tum said the foreigners came to the country as tourists.

foreigners are being detained at the Homa Bay police cells.

“Officials from the Immigration Department are verifying their documents,” Tum said.

The police boss said the Egyptians will be deported back to their county should their travel visas be found to have expired.

they neither speak fluent English nor Swahili.

The arrest came three weeks after another Egyptian was arrested and charged with operating a business in the town illegally.

Ahmed Abdelwekel was fined Sh100,000 for lacking a permit.