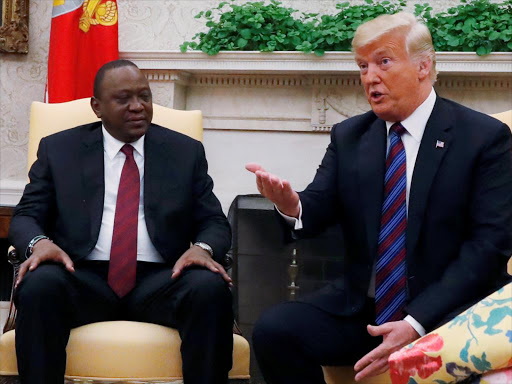 President Uhuru Kenyatta on Monday met US President Donald Trump at the White House in Washington DC and invited the US to increase its trade and investments in Africa.

Speaking during a bilateral meeting held at the Cabinet Office in the White House, President Uhuru and President Trump also agreed to bolster the Kenya-US partnership in peace and security especially in the Horn of Africa region.

“We have had very strong and excellent cooperation with the US in security and defence, especially in the fight against terrorism. Most important, we are here looking to enhance our partnership in trade and investment,” President Uhuru said.

President Trump said Kenya and the US will continue to work together to grow their partnership in trade, investments and security.

“We do a lot of tourism, we do a lot of trade and defence. And we working very much in security right now,” President Trump said.

The US President added: “We appreciate very much your being with us here.”

The two leaders also discussed the direct flights from Nairobi to New York by Kenya Airways that are set to commence in October and agreed that they will boost tourism and trade for the mutual benefit of the two countries.

They cited the African Growth and Opportunity Act (AGOA) as one of the main areas that is set to benefit from the direct flights from Nairobi.

After the official welcome formalities, President Trump ushered President Uhuru into the Oval Office for one-on-one talks before joining their respective delegations for the bilateral talks in the Cabinet Room.

President Uhuru’s historic visit to the White House makes him the second African leader to hold direct talks with President Trump, the only other leader having been Nigeria’s President Muhammadu Buhari in April this year.

Before the White House visit, President Uhuru earlier met and addressed members of the US Business Council for International Understanding (BCIU) and encouraged them to take advantage of the opportunities created by his Big Four development blueprint by investing more in Kenya.

The historic direct talks between President Uhuru and President Trump are a major boost to President Kenyatta’s Big Four development agenda as well as the renewed war against corruption and economic crimes in the country.