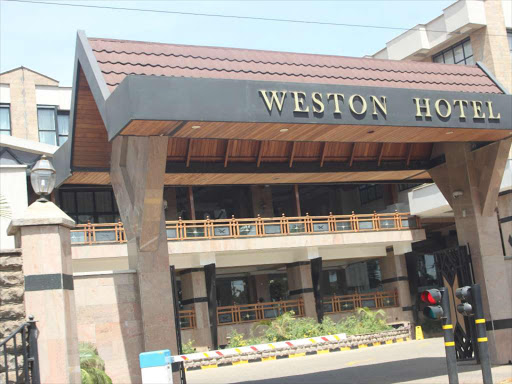 The Kenya Civil Aviation Authority has declared publicly for the first time that it owns the plot occupied by Deputy President William Ruto's Weston Hotel.

KCAA executive director Gilbert Kibe yesterday said the plot on Langata Road in Nairobi is among hundreds of parcels that it wants to reclaim.

“All I can tell you is that we are trying our best to repossess our land. We are in court with several cases and the rest is with National Land Commission. Yes, Weston Hotel is part of the land but the case is with NLC,” Kibe told the Star.

Kibe was responding to a campaign started on Monday by economist David Ndii who tweeted asking President Uhuru Kenyatta to demolish the hotel. He attached an exclusive story from the Star in June 2015 detailing how Ruto acquired the land.

"[Uhuru], this is public land. One more friend you need to lose. And once you are done with him, turn yourself in,” Ndii said in a tweet tagged to the DP that went viral on social media.

In June 2015 Ruto admitted that he had interests in the hotel on Citizen TV’s The Big Question programme.

The Survey Plan Folio Number 198 and Register Number 169 was registered on January 31, 1990, and showed that the land belonged to the Directorate of Civil Aviation.

Yesterday, Nairobi Governor Mike Sonko said all structures on riparian or public land will be demolished, while ticking off Kiambu Governor Ferdinand Waititu who wants rivers rerouted to save buildings.

“My good friend and colleague should concentrate on his county. He should know we don't mix friendship with work. Even Weston, my Buruburu Casurina coco beach plot, Taj Mall and many other buildings shall not be spared if found to be on riparian or public land,” Sonko wrote on Facebook.

The Auditor General's report for the year ending June 30, 2016, showed that the Public Investment Committee had referred the Weston transfer to the National Land Commission for investigation with a view to restitution.

The acting chairperson of the National Land Commission, Abigael Mbagaya, yesterday told the Star that they no longer have powers to conclude such cases.

“The case came to us. However, our mandate to review grants expired on May 2, 2017. We went to Parliament to seek an extension but they haven't done that so there is nothing we can do at the moment,” she said.

“We can't revoke titles any other way or continue the process without the supportive law,” she added.

Section 14 of the NLC Act allowed the commission to probe grants and transfers of public land but only for five years from May 2, 2012.

Therefore, the NLC lost its powers to conclude land disputes last year and can no longer receive fresh complaints.

Court and government documents show that senior government officials tried to block the transfer of the Weston plot.

Francis Muthaura, then the PS in the Transport ministry, wrote on August 22, 2001, to Lands PS Nehemiah Ng'eno, asking him to issue a title deed in favour of the Directorate of Civil Aviation after a Ms Kikubi had applied to be allocated the land.

“In order to safeguard ownership of the government plot, which seems to attract the attention of property developers, I request that your office issue a title in favour of DCA,” Muthaura said in his letter Ref No MTC/CONF/6.111/(55).

Despite Muthaura's plea, the land was allocated to Priority Limited, a company associated with Ruto, on August 30, 2002, a few months before Kanu lost the presidential election and while Ruto was Home Affairs minister.

In January 2003, the new Transport PS, Sammy Kyungu, wrote to Lands PS Francis Baya, noting that public land had been fenced off by a private developer.

In 2009 company returns filed by Weston Hotels listed William Ruto and Rael Kimeto as the directors of the company.

In 2010 the annual returns of Weston Hotels showed that the ownership had changed to Matiny Limited, Rael Kimeto, Merica Holdings Limited and Eric Kipkoech Ng’eno.

In 2014 Patrick Osero, a close associate of the DP, claimed that the hotel belonged to him, to deflect public criticism of the land transfer.

Post a comment
WATCH: The latest videos from the Star
by By RAMADHAN RAJAB @Rrajab
News
15 August 2018 - 06:00
Read The E-Paper