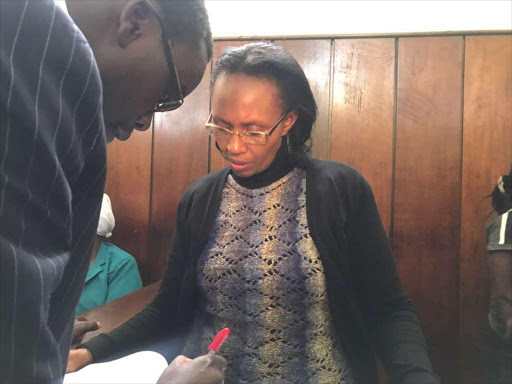 Wangare was arrested alongside 13 others on claims of putting up a building in Nairobi without City Hall approval.

She was released on Sh80,000 bail after denying the charges of occupation of a building structure without permission. The case will be mentioned on September 6.

In a leaked recording, which was widely circulated on social media, Sonko promises Waititu he will release his wife but refuses to help the rest.

This did not go down well with Twitter users who said the governor's move to intervene in the arrest only proved the country belongs to the rich.

"That video of Sonko telling Waititu’s wife that she will be released but he can't help the rest clearly shows wanyonge hawana haki (helpless have no rights)," Amal Abdul said on Twitter.

Amal further questioned how Sonko was going to fight cartels yet he was "releasing those in his corrupt circle".

"Just like that Waititu's wife, Susan Wangare walks free thanks to Mike Sonko. Back to business as usual," he added.

Twitter user @Kinyan Boy acknowledged that Sonko had rightfully admitted to breaking the law adding that "having connections was necessary in the country".

In the phone conversation, Sonko tells Waititu: "I am breaking the law by securing the release of our wife. Call the boss or Waita concerning the others."

He adds that in no uncertain terms should the law be adjusted to suit one's class, title, religion, tribe or any other form of discrimination.

Hezbon Mureithi said it was wrong for Sonko to record and leak a private conversation he had with his counterpart.

"It was also unlawful for Waititu to unduly demand the release of his wife Wangare," he said.

Sonko further alleges that the directive is from above, implying that President Uhuru Kenyatta is controlling the ongoing crackdown on illegal buildings.