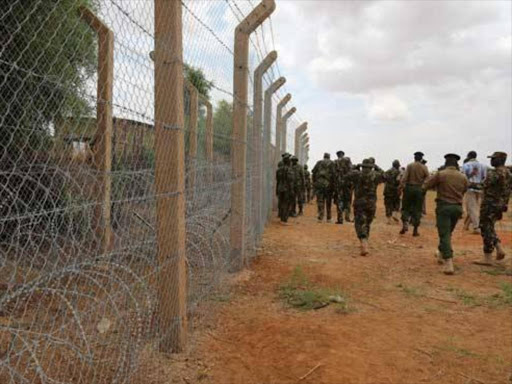 Three Mandera border wall workers were killed after their vehicle ran over a landmine on Monday, August 13, 2018. /TWITTER

Three Mandera border wall workers died on the spot and two others were seriously injured when a vehicle they were in ran over a landmine.

Area OCPD Daniel Chacha said the workers were clearing a road along the security wall before they were struck at about 10 am.

He said the team was headed to their workstation when the device exploded.

Chacha declined to comment on whether the workers were accompanied by security officers at the time of the attack. He promised to do so later.

"It is true there was an attack where some lives were lost. Let me get back to you with more information later," he said.

Al Shabaab militants, who have since claimed responsibility through their Radio Onduras, are suspected to have planted the device on Sunday night.

The incident is likely to spark panic among the workers who have been assisting KDF officers in the construction works.

Elwak MP Kulow Ali asked the police to reinforce security, especially along the border where the militants are likely to carry out attacks.

The wall, whose progress has been slow, was meant to cushion the country from attacks executed by militants who cross through the porous Mandera border.