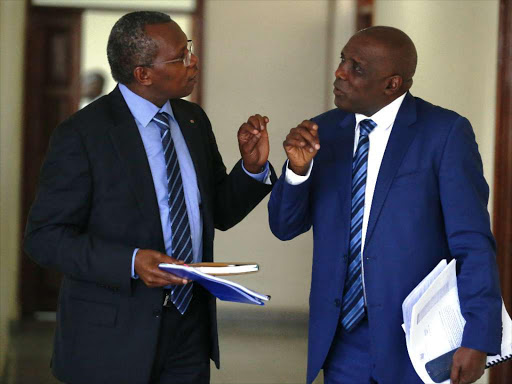 Beleaguered National Land Commission boss Muhammad Swazuri went behind the backs of his commissioners to authorise compensation for dubious plots that has now landed him in hot soup.

Phase One of the SGR compensation was estimated to cost about Sh30 billion.

Swazuri, NLC chief executive Tom Chavangi and Kenya Railways boss Atanas Maina are among seven top guns who were dramatically arrested over the standard gauge railway payouts on Saturday. They have spent two nights in custody at Integrity Centre and will be charged today in what would effectively render them jobless.

“The charge sheet is being drafted. But it all revolves around questionable compensation,”EACC spokesman Yassin Amaro told the Star.

DPP Noordin Haji has approved the arrest of 17 suspects but by 2pm yesterday, 10 were still at large.

“They’ve switched off their phones and hid. But our team is relentlessly pursuing them,”Amaro said.

On June 21, the Star exclusively reported that Swazuri disregarded resolutions by the NLC commissioners and unilaterally authorised payments to individuals with dubious land documents for the lucrative SGR compensation.

Documents indicate that Swazuri disregarded the resolutions of the NLC subcommittee on review of grants and disposition of public land which brings together all the nine commissioners. This explains how the other commissioners, including vice chair Abigael Mbagaya, survived the graft crackdown.

On July 22, 2015, the review subcommittee resolved to revoke the titles of five parcels in Embakasi, Nairobi, that were irregularly issued by the Lands ministry.

The property was not eligible for compensation. It was on the railway reserve — meaning the land belonged to the Kenya Railways Corporation. In 2016, however, Swazuri wrote to KRC managing director Atanas Maina rescinding an earlier commission decision not to pay for the five parcels.

“In view of the forgoing, and having reviewed the submissions of the parties and documents submitted, the commission reconsiders its decision and finds that the titles to the property be upheld... revocation shall not be effected against a bona fide purchaser for value without notice of a defect in the title,” Swazuri wrote.

From the five plots only, the NLC paid Sh314 million. Some of the controversial parcels are LR No 9085, 9088 and 9087 owned by Dasahe Investment Limited, and LR No 9086 owned by Olmotit Estate Limited.

“NLC officials, fully cognisant of that fact, proceeded to irregularly and illegally award and compensate the entities in whose favour the fraudulent registration had been done,”Haji said.

“Regrettably, the KRC — the custodian of Railway reserve — actively participated in the entire process of compensation undertaken for and and on their behalf by the NLC.”

Expectedly, directors of Dasahe Investment Limited and Olmotit Estate Limited are those to be arrested. Dasahe was paid Sh177.5 million for three parcels through KCB, Kipande branch, held under the name of Keibukwo Investment Limited.

Curiously, LR No 9086 that Swazuri said was owned by Olmotit Estate Limited was paid through the same account for Sh43.8 million.

Another controversial parcel, LR No 29455, which had no title deed at the time of compensation, was acquired for Sh82.8 million through Standard Chartered Bank, Treasury Square, Mombasa branch, to an account belonging to Bakhresa Grain Milling Kenya Limited.