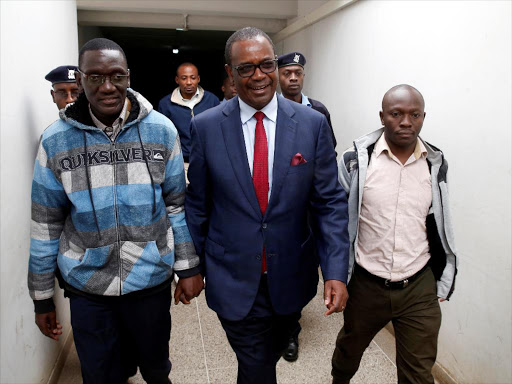 Former Nairobi governor Evans Kidero has been released at a cash bail of Sh2 million.

Kidero and his co-accused Maurice Okere

also been given a bond of Sh3 million with a surety of the same amount.

if they do not raise the cash bail.

Kidero was arrested on Wednesday evening and taken to the Anti-Corruption Court.

He and seven others are

During arguments for the release of Kidero and Okewe on bail, lawyer Tom Ojienda asked Chief Magistrate Douglas Ogoti

not to be "too strict" as they are "law-abiding citizens".

"There is no reason why they would not avail themselves for trial. None of the accused persons has [cases of] past criminal conduct and they cannot interfere with witnesses," he said.

Ojienda further said the accused no longer work for the county so they do not have access to documents and employees.

He also claimed that the delay in charging Kidero was deliberate to deny him from securing bond.

"Kidero was on his way to the EACC when he was arrested. He spent more than 23 hours at the commission. He slept there and was cooperative with investigators," he said.

ordered the rest who were not in court today to present themselves to the EACC by Friday at 10.00 am.