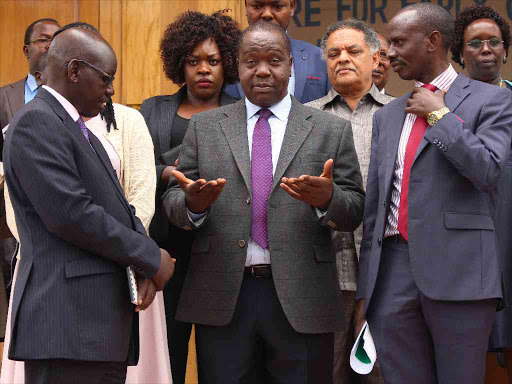 The committee wants the minister investigated alongside Education Principal Secretary

Senators called for the investigations on Wednesday, saying the two should be probed in three months.

of the quality assurance and standards

said in its report.

If found culpable, the two will be barred from holding public office.

Matiang'i and Kipsang disregarded the ministry's internal report on authorising Sh1.5 billion payments for the property.

Fresh documents tabled in Parliament showed that a team appointed by the Ministry of Education to investigate the land’s ownership concluded that the parcel occupied by Ruaraka High School and Drive-In Primary was public.

The report by the Quality Assurance and Standards task force was submitted to Matiang'i and Kipsang on February 3, 2017 — 11 months before the duo approved payment of Sh1.5 billion to city businessman Francis Mburu.