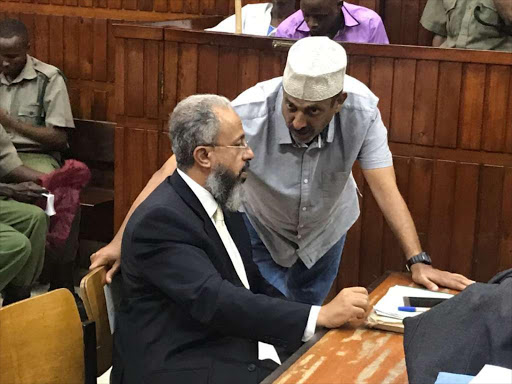 Ivory kingpin Feisal Mohammed at Mombasa court where he was acquitted of charges of being in possession of Sh44 million ivory on August 3, 2018. /MALEMBA MKONGO

Chepkwony said Feisal had already served enough time because he has been in prison since the time his trial began.

The judge said after interrogating the evidence adduced before the court, she found many gaps.

Chepkwony said the evidence was circumstantial.

Feisal had been charged alongside five other people who were acquitted.

A Mombasa court had sentenced Feisal in 2016 after he was found guilty of possessing Sh44 million ivory.

She also fined him and said he must serve as an example for those behind the poaching menace in the country.

Feisal was arrested by Interpol agents in Dar es Salaam, Tanzania, in December 2014.

The magistrate acquitted the other accused persons, saying they had been caught up in Feisal's dealings unknowingly.

Post a comment
WATCH: The latest videos from the Star
by By MALEMBA MKONGO @malemba_mkongo
News
03 August 2018 - 15:00
Read The E-Paper