Six KWS officials suspended over deaths of rhinos at Tsavo 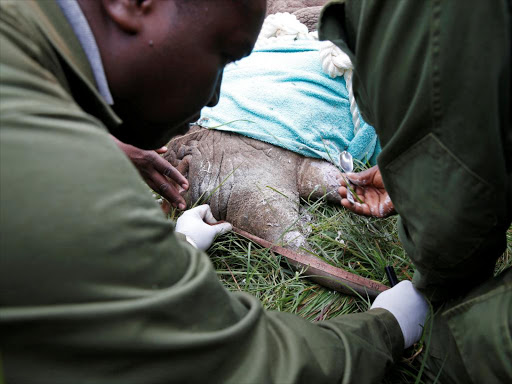 Six senior Kenya Wildlife Service officers have been suspended as investigations revealed that the translocation of rhinos was poorly managed.

Tourism CS Najib Balala on Thursday said the 10th rhino "sadly died on Wednesday while the remaining female had been attacked by lions".

The tough-talking CS revealed that the cause of the deaths was multiple stress syndrome that was intensified by salt poisoning.

It was further aggravated by dehydration, starvation, a proliferation of opportunistic bacteria in the upper respiratory tract, gastric ulcers, and gastritis.

"The independent inquiry further showed there were areas of clear negligence that occurred past translocation at the release site in Tsavo," Balala said.

"This was especially in the holding bomas at the sanctuary. There was poor coordination and communication among those responsible for translocation."

Balala, who addressed the press in his office, said even though three assessments had been done, a part on water was hardly considered before translocation.

"The investigator found unacceptable professional negligence among officers," he said.

Those suspended include the deputy director of biodiversity, research and monitoring Dr Samuel Kasiki.

Francis Gakuya, the head of veterinary and capture, was also suspended for disregarding the checklist before translocation.

Dr Isaac Leekolol, the head of capture service, was also asked to take responsibility for improper care of animals at the holding boma.

He said the officer was supposed to advise and monitor all aspects of the suitability of the new home.

The rhino inquiry team included Benson Omondi of the DCI, University of Nairobi Don Peter Gathumbi, and Dr Kuria Gachungia from the Directorate of Veterinary.

Others were Dr David Zimmerman, a senior veterinary manager SansParks, South Africa, and Patrick Omondi from the ministry.

The exercise was stopped after the rhinos died.

DG Kimani has also been asked to go back to his previous position of director of parks and reserves.

The principal at KWS training institute will take over in an acting capacity as DG.

Patrick Omondi, director for research, monitoring at the ministry, takes over as acting director of biodiversity.

These were the timing of relocation that was not syncronised during the period of optimal conditions at the destination.

"The actual capture and relocation was above average," he said.

"However, the standard operation standards followed by capture team were not best practices," Zimmerman said.

He said there was no tranquiliser to mitigate against anxiety, stress, during translocation and holding.

Holding place was found inadequate with outdated, portable bomas not suitable for rhinos.

Prof Gathumbi said there was poor body conditions, dehydration, scanty feed in the stomach, traumatic skin wounds and bloodstained froth in the trachea.

Omondi on his part said water salinity level was not considered during the final translocation, a move that compromised the rhinos.