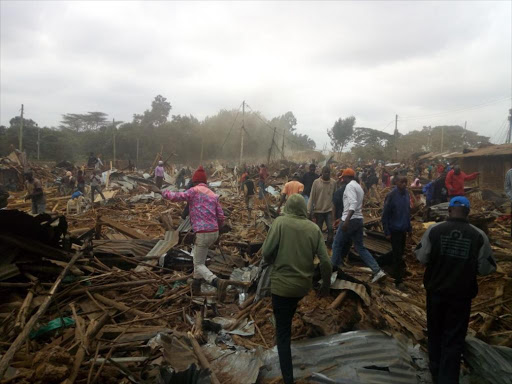 Residents score through debris after their structures were flattened in Kibera to pave way for road construction, July 23, 2018. /JULIUS OTIENO

Kibera residents on Monday woke up to an unsightly experience as they watched government bulldozers flatten what they have called home for years.

The demolition started at about 6am and the NYS bulldozers flattened everything in sight to pave way for the construction of a link road.

Works on the link passage that connects Langata Road and Ngong Road had stopped as the 600m stretch was yet to be cleared.

The National Lands Commission said the lot will be given goodwill stipends to enable them move out and settle elsewhere. The notice of eviction expired on July 16.

Those who were yet to leave after Kura extended the notice to Sunday told the Star said they were woken up at 3am by police officers who asked them to remove their belongings.

Benjamin Musonye said: "They only gave us two days to vacate our houses. On Saturday I was away and came back yesterday and is yet to get another house to rent."

Khlaika Hussein, another resident, said they have been pleading with the agencies involved in the works to allow them salvage some of the materials that were used in building the tin shacks.