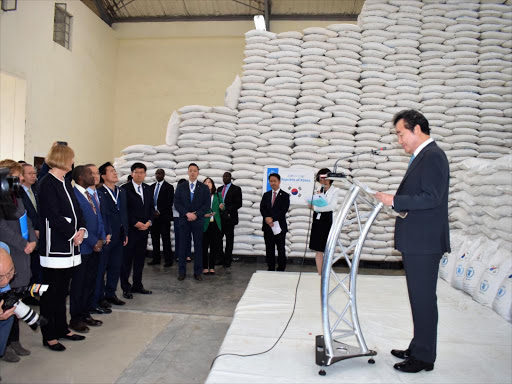 South Korea Prime Minister Lee Nak-yon when he handed over 33,000 tonnes of rice to WFP at a warehouse in Nairobi on Saturday, July 21, 2018. /COURTSEY

South Korea has donated 33,000 metric tons of rice to Kenya to help provide food assistance to more than 1.5 million people.

The donation, received by World Food Programme (WFP) on Saturday, will be allocated to refugees living in Kenya, Ethiopia and Uganda.

WFP said this was the first-ever rice donation received from Korea adding that it will be of great help to 400,000 refugees living in Dadaab and Kakuma refugee camps.

It is projected to sustain the food needs at the various camps for at least four months starting August.

Regional director Erika Joergensen thanked the government and people of Korea for their generosity.

"I truly hope and believe this is the beginning of a strong partnership between WFP and the Republic of Korea," he said.

During his maiden visit to Kenya, the Prime Minister of Korea Lee Nak-yon handed over part of the consignment to WFP’s representatives at a warehouse in Nairobi.

"The rice provided by the Government of the Republic of Korea may not be enough to solve the entire hunger issue, but I hope that it can help to ease refugee hunger," Lee said.

"I hope that even one sack of rice can help to ease the minds of these refugees."

Lee noted that food instability within East Africa had worsened due to frequent droughts caused by climate change and due to conflicts in the region.

"Food instability in the region is too great a burden for any single neighbouring country to bear."

"With the WFP playing a key role, the international community must overcome this food crisis by pooling its resources," he added.

The PM acknowledged the food security status report by the UN which stated that one-ninth of the world's population, or 800 million people are suffering from malnutrition.

He said that the international community should pool their efforts together in order to aid Kenya’s Sustainable Development Goal of Zero Hunger by 2030.

The Asian leader has been in Kenya on a two-day official visit. He held talks with President Uhuru Kenyatta at State House focusing on Big 4 Agenda and strengthened ties

Lee also said that Korea will open its market to Kenya’s agricultural produce such as coffee, tea and flowers.

The two countries have signed the Health Co-operation Agreement, which has culminated in strengthening Kenya’s health system.

Some of the projects in progress on this front include the maternal outreach program, collaboration between National Hospital Insurance Fund and Korea Foundation for International Health and the Disease Prevention project.