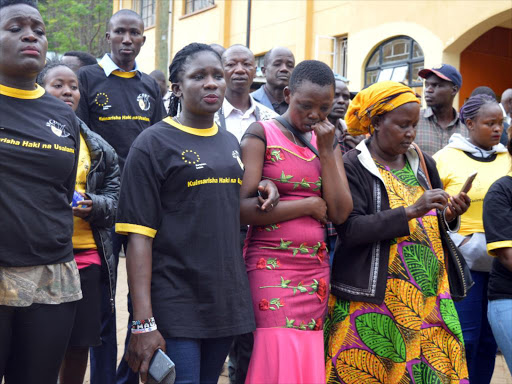 An OCS in Migori faces six months in jail after failing to produce in court, a suspect who went missing while in custody at Kehancha police station.

Kehancha OCS Kipsaina Serem failed to comply with the order to produce Daniel Baru dead or alive, and a judge will on July 30 rule on whether he is in contempt of court.

Daniel was arrested by Administration Police officers at Kehancha town on January 12, 2017 on claims he participated in a robbery and taken into custody at the said police station.

He was arrested alongside Samuel Riro, and Joseph Makenge - a motorcycle rider. Samuel Ikwabe, Isaiah Mwita, and Rael Burure were also arrested.

Daniel hasn't been seen since then, forcing the family to petition the court, in a matter filed by the Kenya National Human Rights Commission (KNHCR), to have him produced.

On May 31, 2018, the court issued an order of Habeas Corpus directed to the OCS Kehancha police station to produce the person or the body of Daniel Baru

before a court of law by June 4.

The court was told on Friday that Inspector General of Police Joseph Boinnet has sent signals to all police stations and border posts to help unravel Daniel's whereabouts.

Peter Thuku, who was representing Boinnet, told the court that the IG was taking the matter seriously.

"The DCI is conducting investigations. He has recorded statements from the 4th respondent (OCS) and others. He has sent signals to border posts to establish whether he may have left the country. He has published the order of a missing person," Thuku said.

Thuku said the IG had complied with the court orders and had sent his representative since the court summons was issued.

"The Immigration department has been notified, various police stations have been sent signals to help trace the 1st petitioner. Time is needed to get the outcome of this investigations. The 1st petitioner could be in any part of this country, and IG would require the input of all bodies involved to work together closely to resolve the case," Thuku told the court.

Justice Anthony Mrima ordered the contempt hearing to proceed despite spirited attempts by the Attorney General’s office to stop the proceedings.

During his submission, the OCS said he has made efforts to comply with the habeas corpus adding that his employer has ordered fresh investigations to establish Daniel's whereabouts.

Kipsaina said the orders require time for him to comply.

"The OCS was not properly represented in court, he wasn't represented by an officer from AG office. We are seeking for his right to fair representation," his lawyer told the court.

But the judge said he had already established that Daniel Baru was in police custody when he disappeared.

The court was also told that the police stole Daniel's Sh35,000 and when he demanded the cash, he disappeared.

"We have already settled the matter of custody; how long do you want to produce the petitioner in court? We cannot stop these proceedings now."

"The ruling has been made, this contempt case will proceed," the judge said.