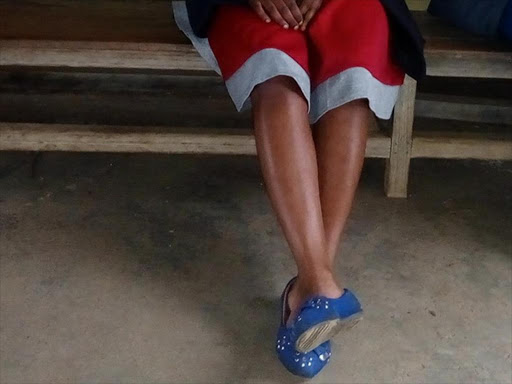 Mary Mwangi after she was discharged from the J.M Memorial hospital on Thursday, July 20, 2018. /NDICHU WAINAINA

A student in Nyandarua has accused her schoolmates of poisoning her for informing the principal of a planned strike.

The 18-year-old said her schoolmates, backed by a teacher, had threatened her on ground she exposed the strike plot.

"My mates said they must revenge. The teacher spoke of 'people who have become the principal's spies."

The student said she was afraid to go for tea break and lunch on Wednesday after the accusations were levied against her.

"Later, I asked a friend for a cup of tea since I was hungry. I did not take it because I didn’t have the appetite at the time," she narrated.

"I left the cup at the window seal and went for Christian Union prayers. When we came back at around 4 pm, hunger had gotten the better part of me so I decided to take the tea. I just took one sip and felt a burning sensation in the throat."

Mwangi said that she decided to keep the tea as evidence but since the principal and the deputy were not in, she decided to go with it at home to show her mother.

"When I got home, my stomach started groaning and it felt acidic with a burning sensation," the student explained.

Her mother, Penninah Muthoni, said she’s saddened by what happened to her daughter.

"It’s very painful. Playing with the life of someone’s child is heart-wrenching. I want justice. Action should be taken against the students involved because their identities are known," Muthoni said.

Principal Joseph Mathenge said he could not comment on the poisoning issue on the phone.

Samuel Mwaura, J.M Memorial Hospital administrator, said the girl was treated of poisoning but said only government chemist can establish what poison was used.