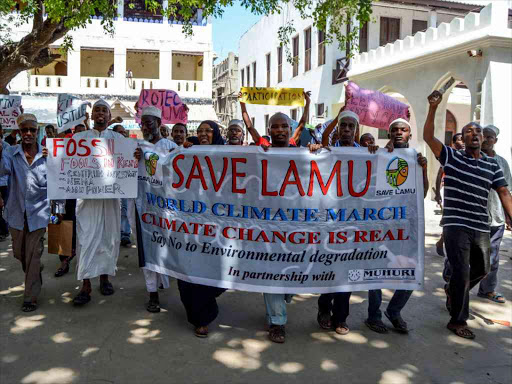 Residents hold placards as they gather in a protest against government plans to build East Africa’s first coal plant in the coastal town of Lamu, December 6, 2016. /THOMSON REUTERS FOUNDATION

56 institutional and individual investors with $713 billion (Sh71.3 trillion) in assets under management asked General Electric to pull out.

In May, GE, formerly General Electric, agreed to buy a Sh40 billion stake in Amu Power and to manage and maintain the Lamu coal plant.

The GE investment is however still subject to regulatory, board and lender approval.

GE's investment would primarily be in the form of new steam turbines and boilers for the refurbished coal plant from China. China decommissioned over 100 coal power stations last year.

"GE has apparently agreed to reconsider their support and investment in the Lamu coal plan," said professor Daniel Kammen, Director of Renewable and Appropriate Energy Laboratory at the University of California, Berkeley.

He was the Science Envoy to the US State Department under President Barack Obama.

Kammen said: "From my published analysis, the absurdly costly economics of the Lamu coal-fired power plant have been clear for years."

The investor letter claimed that the Lamu coal plant would raise electricity costs in Kenya.

"This plant will affect not only Lamu but also all Kenyans as its construction and operation will cause an increase in electricity rates for everyone," said the investor letter.

Scientists believe that the cost of coal power in Kenya is double the cost of geothermal power.

They said the coal plant will release toxic pollution into the air and leaves behind ash that can contaminate groundwater supplies.

They said that this is "at odds with GE’s public positioning on climate change and the company’s stated support of the 2015 Paris Agreement.’'

the livelihoods of fishermen.

"This decision opens the door for what Kenya really needs, investment and partnership to take advantage of the geothermal, wind (on- or off-shore) energy resources that are both cheaper than coal in the long run, and provide greater job creation," said Kammen.

The African Development Bank is reportedly also reluctant to provide a credit guarantee for Amu Power for the Lamu coal project.

The Lamu coal plant was originally conceived to exploit coal from the Mui basin in Ukambani.

However, at some point, it was decided that it would enter into a purchase agreement for South African coal for the next 30 years.

In 2017 in Beijing, President Uhuru Kenyatta witnessed the signing of the Sh205 billion agreement between Power China Resources and Gulf Energy for the Lamu coal-fired power plant.

Amu Power is a consortium of Gulf Power and Centum, a Kenyan investment group whose largest single shareholder is businessman Chris Kirubi.

He argued that the plant will not use clean coal technology as it claims.

Professor Kammen and his team developed and published the SWITCH-Kenya model in 2017 using state of the art technical and economic data from East Africa, and have identified a range of clean energy investment opportunities in Kenya that are far cheaper than the Amu Coal-fired power plant for Lamu.

Post a comment
WATCH: The latest videos from the Star
by VICTOR AMADALA @ItsAmadala
News
19 July 2018 - 12:00
Read The E-Paper