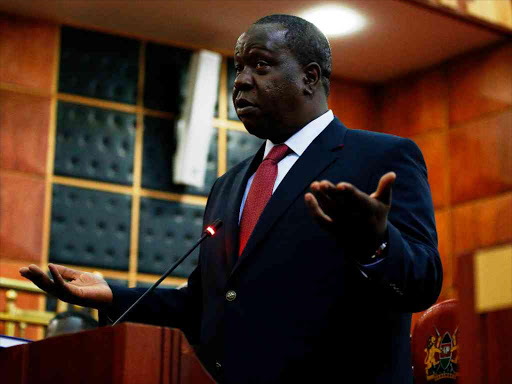 Interior CS Fred Matiang’i has been asked to appear before the ad-hoc committee probing the Solai Dam tragedy on Wednesday without fail.

The CS did not face the team on Tuesday due to what Interior Chief Administrative Secretary Patrick ole Ntutu said was an "urgent security meeting".

Ole Ntutu also noted that the summons were on short notice and that the CS wrote to the Senate Speaker on Monday evening confirming his attendance.

“He signed the letter because he was to present it to you this morning. You can understand, chairman, that the kind of job we have - of protecting Kenyans - is not easy."

This is not the first time that Matiang'i has failed to appear before a committee for questioning on national issues.

On June 26, the minister did not show up for the probing of contraband sugar for the second time. He said he was involved in the EAC heads of state summit that was being hosted by President Uhuru Kenyatta.

Before that, Matiang'i skipped sessions concerning the fate of deported lawyer and NRMKe General Miguna Miguna.

The CAS tabled a report containing responses to matters the committee had wanted clarified. It includes

the official list of victims of the tragedy that happened on the night of May 9.

Committee chair Mutula Kilonzo Jr, who is Makueni Senator, asked Ole Ntutu to tell his boss to report at 11 am.

“I believe his undertaking to come is still on ... [he should] present his letter alongside the other issues that have been raised at national level,” he siad.

“We don’t doubt you. It's only that we want him to present it himself,” he went on to say, stressing that there were no plans to extend the hearings past Wednesday.

On July 6, Mutula and his team accused local administrators of creating fake lists of Patel Dam victims which they wanted compensated.

The committee, which had toured Solai and interviewed victims, heard that they were

The victims told the committee that families who lost their kin were paid Sh100,000 while landlords were given Sh1 million.

The ministry said it will investigate the claims.