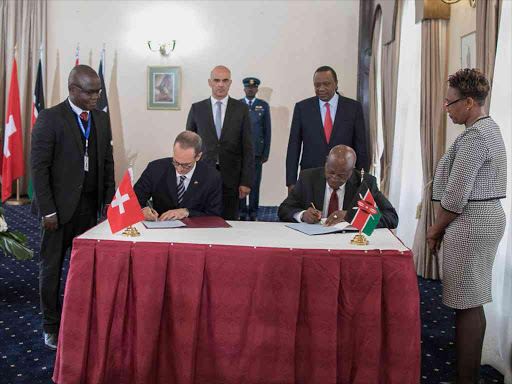 President Uhuru Kenyatta and his Swiss counterpart Alain Berset yesterday witnessed the signing of a key agreement that clears the way for the recovery of assets acquired through corruption and crime in Kenya and stashed in foreign countries.

The two presidents said the agreement, Framework for the Return of Assets from Corruption and Crime in Kenya, will create a mechanism for Kenya to recover money stolen by corrupt individuals and hidden in Switzerland, the UK and Jersey Island.

The agreement is supported by the UK and the Jersey Island.

President Kenyatta said the signing of the agreement at State House, Nairobi, was part of his resolve to eliminate corruption, adding his stand is clear.

“We have seen in the last few months a new intensity in the fight against corruption in Kenya. Quite frankly, my administration has shown that corruption cannot and will not be tolerated,” he said.

The framework, which is in line with the United Nations Convention against Corruption, provides the principles to guide the recovery of stolen assets.

The first assets to be targeted by the new framework will be monies stolen through the Ango-Leasing scandal and hidden in Switzerland.

“In the spirit of the Global Forum on Asset Recovery’s Principles for Disposition and Transfer of Confiscated Stolen Assets in Corruption Cases, returns should proceed in a transparent and accountable manner with the mutual consent of both Kenya and the partner offering the return,” the new agreement states.

The agreement further states assets recovered under the mechanism will be used to pursue clearly identified development objectives, for example in the health sector, that benefit Kenyans in line with the 2030 Agenda for Sustainable Development and Vision 2030.

A steering committee comprising the Executive Office of the President, the Attorney General, the National Treasury, the Assets Recovery Agency, Ethics and Anti-Corruption Agency and envoys representing the partner countries will be established to implement the deal.

It will also monitor progress in returning assets and receive reports on the progress of projects funded through recovered assets.

The agreement also has a provision to allow other nations willing to cooperate with Kenya in the recovery of stolen assets to join.