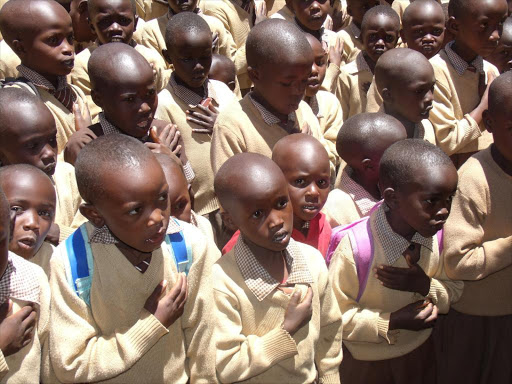 Children in uniform at a school in Eldoret. /Mathews Ndanyi

The government will introduce a single uniform for all schools.

This is after the recent adoption of the same colour for school buses.

Education Principal Secretary Belio Kipsang says they are in discussion with stakeholders to change the uniform policy and have schools adopt same colour and fabric.

He wants local textile industries like Rivatex in Eldoret to prepare to manufacture the new uniforms once the new policy is adopted.

“As we move towards having the same uniform and fabric in all our schools we want Rivatex to prepare so that they are able to play a role in the manufacture of the uniforms that will be required,” Belio said.

Former education CS Fred Matiangi ordered all schools to paint their buses yellow in a bid to control the use of the buses by schools.

The move has since been effected.

was speaking at the Rivatex firm in Eldoret which is owned by Moi University.

The PS lauded the university for its foresight in identifying the revival of the textile company that had collapsed.

“Initially we thought it would just be a training facility for Moi University but later on it became a production company and now it’s turning out to be a major economic project for the country,” said Belio.

He said the government would continue to invest more in education institutions so that they play a critical role in providing require manpower for the country and also play a role in economic growth.

“We want the education institutions to play a role in helping us to implement the Big Four Agenda as outlined President Uhuru,”, said the PS.