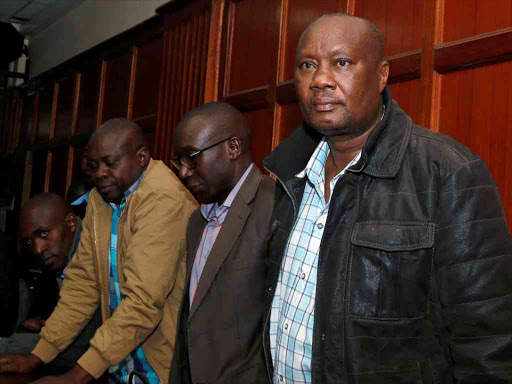 on Sh1 million cash bail each in the case of the alleged theft of Sh20 million county money.

In a ruling on Friday,

Anti-Corruption Court Magistrate Douglas Ogoti noted that the prosecution did not show how the suspects can interfere with witnesses.

Ogoti instructed the four to report to

the investigating officer at EACC's Malaba office every last Friday of the month.

The magistrate issued warrants for the arrests of four other accused persons.

the three were remanded on Thursday after denying seven counts of fraud.

The Governor's lawyer James Orengo had wanted the magistrate to give them temporary freedom but Ogoti opted for a "wholesome and reasonable ruling".

Ojaamong and several other were charged with engaging in a scheme to defraud the county government between the months of March and September 2014.

A charge sheet lists seven counts ranging from abuse of office, conspiracy to commit an economic crime and engaging in a project without proper planning.

The suspects are also facing a count of willful failure to comply with the law relating to the management of public funds and fraudulent acquisition of public property.