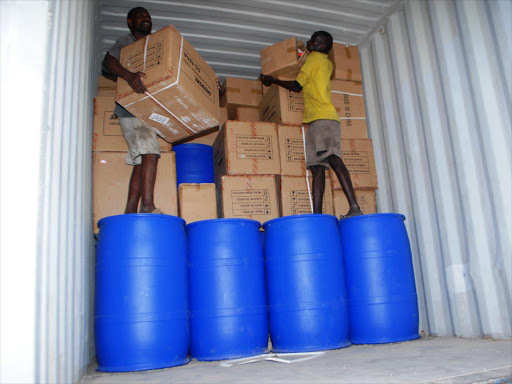 KRA has suspended three of its officers for alleged involvement in the irregular sale of contraband ethanol marked for disposal.

The officers stationed in Mombasa allegedly aided the sale of eight containers of the chemical outside the normal KRA auction process.

According to the authority, the consignment had been concealed as diethylene glycol monobutyl ether and was initially marked for auctioning on August 9, 2016.

“Upon verification, they were not auctioned on the basis that they did not match the description. KRA lab experts identified the substance as ethanol and therefore the items were set aside for destruction,” the commissioner for intelligence and strategic operations said in a statement on Thursday.

The chemical, also known as DGBE, is used as a solvent in coatings and cleaner applications for industrial and consumer markets.

It is also used as a chemical intermediate to produce diethylene glycol monobutyl ether acetate (DBA) and some herbicides, insecticides and plasticizers.

On the other hand, even though ethanol is very commonly used especially in alcoholic beverages, it is a dangerous chemical.

It is highly flammable and can result in comas or deaths through alcohol poisoning if consumed above prescribed levels.

Pure ethanol is twice as strong as most vodkas and has been the cause of deaths across the country as some add it to illicit brews.

According to KRA, the containers of ethanol were re-gazetted on March 16

for auctioning on April 18.

“Preliminary evidence confirms that the goods were not sold on the floor of the auction but outside the normal auction process on June 27.”]

The commission said action will be taken against employees found of the irregular sale of the ethanol.

“KRA has a zero tolerance policy on corruption and all KRA staff have the individual responsibility to uphold integrity at all times,” the statement noted.