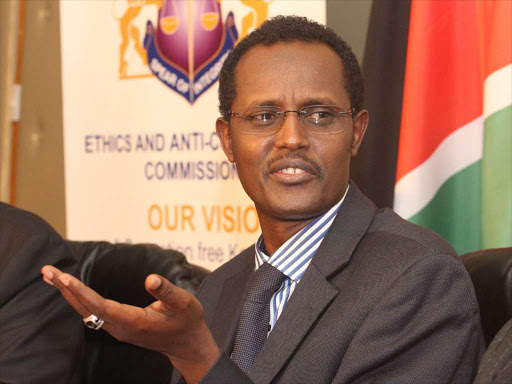 Ethics and Anti-Corruption Commission CEO Halakhe Waqo at his office during a press conference on June 13, 2018. /EZEKIEL AMING'A

Lawyers, engineers and accountants have been involved in facilitating cases of corruption in the country, the chief executive of the anti-graft commission said on Thursday.

Dozens of government officials and business people are facing charges related to the theft of nearly $100 million from a state agency, the latest in a series of scandals that have come to light in a two-month-old crackdown on corruption.

"In every white-collar corruption or a deal, there's a professional facilitating," Halakhe Waqo of the Ethics and Anti-Corruption Commission (EACC) said in an address to a gathering of professional associations.

"If we investigate a road project problem, there is an engineer there – a civil engineer. There is a lawyer who will handle the money from the transactions of the kind. There is an accountant, in the office where these issues are processed. And there are many more participants."

Irene Wanyoike, chairwoman of the umbrella body of professional associations, said they backed the government's campaign to stamp out corruption, including lifestyle audits for public officials, starting with those in procurement.

Kenyans who care for this country," she told the meeting.

With corruption draining funds for legitimate projects from state coffers, the

Kenyan government is failing to pay many of its contractors on time, suppliers and officials say.

Kenyatta pledged to stamp out graft when he was first elected in 2013, but critics say he has been slow to pursue top officials and ministers.

Waqo said that in the 2017-18 (July-June) financial year, the EACC completed 47 cases in criminal courts that yielded 38 convictions. In the same period, the EACC forwarded 143 files to the Office of the Director of Public Prosecution.

There were 418 cases pending in the courts, Waqo said.

On Wednesday, Busia Governor Sospeter Ojaamong and three other officials were charged with conspiracy to defraud the county government. They pleaded not guilty.