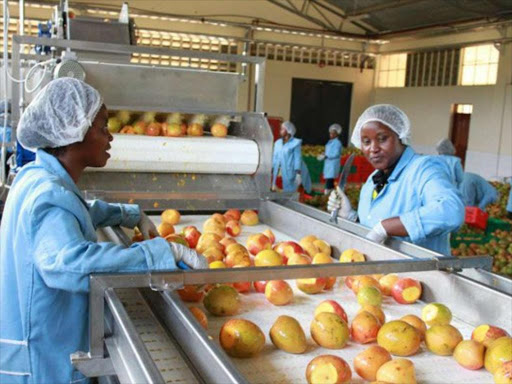 The newspaper cited the milestones made by the county ranging from the fruit processing plant and milk milk-processing in Kikima, Mbooni constituency.

Governor Kivutha Kibwana decided to build the fruit processing plant after realizing that many of the 12,000 mango farmers in his county were struggling to earn a decent living because of the lack of a local buyer.

“They used to earn Sh3(3 US cents) a kilo or even less but now we’re paying them Sh15 adding that with the new-found certainty more farmers have planted mango trees,” it stated.

The plant currently produces only pulp, but by the end of the year, with help from the EU, management plans to install juice-making machinery to give more value to its produce. Water bottling is also on the agenda.

Building on the concept’s success, Kibwana has opened a milk-processing plant elsewhere in the county.

“We want to be a catalyst to create a grassroots economy that will be driven by the private sector,” he says. “But with no one willing to take the risk to invest, we had to take the lead,”read the article.

Situated in six acres of scrubby farmland at the end of a dirt track, the Makueni Fruit Processing Plant does not look particularly special. Production has stopped until later this month when a new crop of mangoes is expected.

In the meantime, construction workers are busy building a storage shed.

But the nine-month-old facility, about 135km south-east of the capital Nairobi, is among the most tangible evidence of how Kenya is being transformed by what is arguably the most radical experiment in devolved government in sub-Saharan Africa.

The plant is the first multi-million-dollar industrial development by one of the 47 county administrations that were created in 2013 after the country enacted a new constitution.

“The plant would not have been built without devolution,” explains Kibwana, the Makueni county governor.

“Previously there was money at the centre in Nairobi and officials there would make decisions about projects in far-flung areas of the country. But most of them failed.”

Now counties are responsible for everything from health services and nurseries to roads and developing their economies. But in the first few years of devolution, with few administrative systems in place, governors had a tough time attracting investors.

Earlier this year officials in Nyandarua, some 50km north of Nairobi, announced it would build a potato-processing plant, supported by the Irish government

In Mandera, in north-east Kenya, the governor has attracted Philips, the Dutch multinational, to set up health centres, as part of a UN-led initiative.

In the past five years, the maternal mortality rate has fallen from 3,785 per 100,000 live births — among the highest in the world — to 588, according to Ali Roba, the governor.

These stories cannot, however, mask the fact that devolution is still, what Kibwana calls a “work in progress”.

Most economists say the governance change has yet to have a significant impact on Kenya’s economic growth. Only 18 of the 47 county governors succeeded in increasing their revenues last year and only 22 were re-elected in the 2017 elections.

In Makueni just one of the 30 county councillors was ¬re-elected. “Many people ran for office in 2013 for the wrong reasons.

They thought ‘it’s my time to eat’,” Kibwana says, using a Kenyan euphemism for corruption. “But devolution has humanised government and people got found out.”

Carole Kariuki, chief executive of Kenya Private Sector Alliance, predicts it will take another “10 to 15 years until everything falls into place”, adding: “It was a major change of our governance system from what we have known for 50 years. So, you cannot expect positive change immediately.”

Analysts say one unexpected benefit of devolution is that it has reduced ethnic violence. While national politics is dominated by only a handful of Kenya’s 43 tribes, the creation of counties has enabled smaller tribes to gain power in their localities.

A drawback of having 47 counties though is that many of them are too small to attract investors.

Some governors have formed regional blocs to attract both investors and development agencies.

One example is the Frontier Counties Development Council, a bloc of seven counties in north Kenya which are among the least developed in the country.

Last December it attracted $1.1bn in development spending from the UN and World Bank for projects ranging from roads and water to agriculture and fibre optic cable.

“As a county the numbers might not add up for investors but as a block they do,” says Anne Kirima-Muchoki, chairperson of the Kenya Investment Authority.

“The counties and blocs are now focusing on their competitive advantages.”