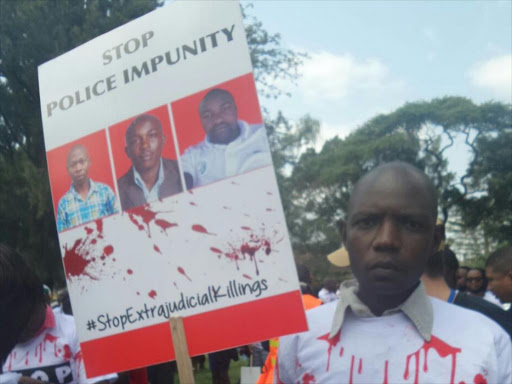 A man holds a sign with the photos of slain human rights lawyer Willie Kimani, his client Josphat Mwenda and taxi driver Joseph Muiruri during a protest at Freedom Corner in Nairobi, July 4, 2016. /PATRICK VIDIJA

Three suspects who had been charged alongside the boda boda rider in the case concerning lawyer Willie Kimani have been freed by a Mavoko court.

They were accused of

The court ruled on Friday that they had no case to answer.

Magistrate Linus Kassan said the prosecution did not prove that the three found with drugs and resisted arrest.

Mwenda, IJM lawyer Kimani and taxi driver Joseph Muiruri were kidnapped on June 23, 2016 when the case was mentioned.

Their mutilated bodies were found eight days later, stashed in gunny bags in a river in Ol-Donyo Sabuk, Machakos County.

AP officers Fredrick Leliman, Leonard Maina, Stephen Chebulet, Silvia Wanjiku and informer Peter Ngugi are on trial for the killings which sparked outrage across the country.

Before he was murdered, Mwenda told the court that

he was shot in the hand by Leliman, taken to hospital, held in custody for a week and later dragged to court where more charges were preferred against him.

On that day while at Syokimau, he was accosted by plain clothes policemen who were reportedly looking for a specific motorcycle.

Mwenda was accosted while riding his boda boda after lunch.

Athi River Hospital. After he was discharged, he was charged alongside the three suspects, who

were unknown to him.

Mwenda filed a complaint against Leliman with the Independent Policing Oversight Authority (IPOA), citing the shooting and wrongful arrest. IPOA introduced him to IJM.

He told the court that he was threatened by the officers with dire consequences and told to withdraw the complaint, which he did not.

He was later charged with carrying excess, uninsured passengers, as well as riding an uninsured motorcycle without driving licence, a helmet and a reflective jacket.

IJM said: “The ruling means that if our client were alive, he would have no case to answer."