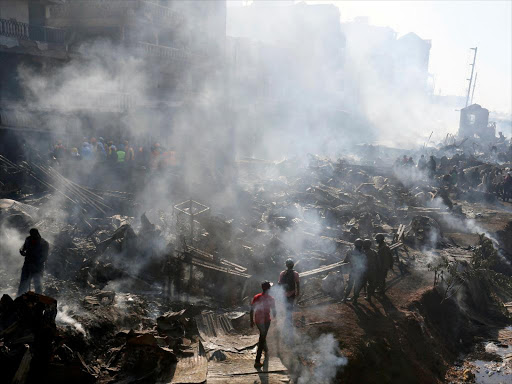 Rescue workers walk at the smouldering scene of fire that gutted down the timber dealership of the Gikomba market and nearby homes in central Nairobi, Kenya June 28, 2018. REUTERS

Deaths at Gikomba market in Nairobi was a result of suffocation, Regional commissioner William Thuku has said.

Fifteen people died in the tragedy and more than 60 others injured.

Property worth millions of shillings was destroyed.

"There is a lot of smoke and most of the people who died might have been suffocated by the smoke.. the wind was blowing really hard causing this to happen," he said.

Speaking when he addressed the media on Thursday, Thuku said they have evacuated residents

from 17 buildings adding that the goods in those building were flammable.

materials and hardware. We are aware that that is what made the fire to spread in other buildings," he said.

"Some gas cylinders were still bursting

when we were here some minutes ago."

Thuku said they are

doing clearance to ensure that there are no bodies that are left in the affected buildings.

The police boss said they have also

"We will be able to seek out people

who lost dear ones and whose relatives are in the hospital

and who lost their goods.

Once we are through with that we will give full details," he said.

Thuku said they want to make sure that the building can be a habitat for the people once they are checked.

The fire started at 2.30am on Thursday from a section that deals with timber and second-hand clothes near Kamukunji.

The injured have been admitted to various hospitals including Kenyatta and Mama Lucy.

In October 2017, after another

in the market, President Uhuru Kenyatta called for investigations to establish the cause of the tragedy that occurred

barely one month after a similar inferno in another

section of the market.