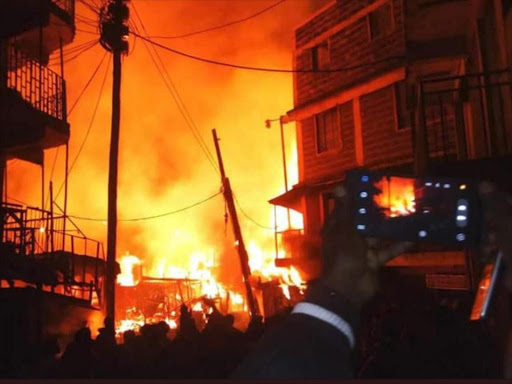 At least 30 people injured in fire tragedy at Gikomba market./COURTESY

Property worth millions of shillings has been destroyed.

The fire started at 2.30am on Thursday from a section that deals with timber and second-hand clothes near Kamukunji.

The injured have been admitted to various hospitals including Kenyatta and Mama Lucy.

Police say they are yet to establish the cause of the fire.

By 8 am, county's fire engines were still at the scene.

Some of the those who died inhaled poisonous fumes as they attempted to salvage their property.

The government has in the meantime

established a command centre and are appealing to the public to report anyone missing.

In October 2017, after another in the market, President Uhuru Kenyatta called for investigations to establish the cause of the tragedy that occurred

barely one month after a similar inferno in another

section of the market.

A spot check by the Star at the time showed that stalls are too compact and not only blocked the roads, but also underground water points for fighting fire.

The electric connection in the market is also being questioned.

Previous fires have been attributed to electric faults.

According to a trader, several stalls share a single connection from the main power point.

Local electricians do the connection, posing a huge risk.

The water problem in Kamukunji constituency compounds the problem.

Residents are unable to effectively help put out fire, they await for assistance from the county government.