No oil will leave Turkana without security and jobs, protesters say 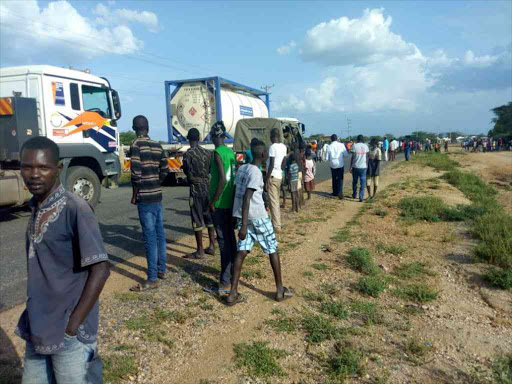 over jobs, tenders, insecurity and the community's share of proceeds from the oil. The demonstrators demanded that the trucks be driven back to

Africa Camp Solutions where they had been blocked by traders from Lokichar town.

Philip Lodio, a resident of Kalemngorok, noted that President Uhuru Kenyatta issued a shoot to kill order on bandits terrorising residents of Turkana and Pokot communities.

"Since his order, we have experienced several bandit attacks, the most recent case being in Kamuge village. Our people at Kapedo, along the border of Baringo and Turkana counties, rely on security to access shops in Marigat town," he said.

"Despite the order by the President at Ngamia 8, three police reservists were shot dead and livestock stolen at Lokori Ward where the first four oil trucks were flagged off." .

pointed out that since the discovery of oil, residents in Turkana South and Turkana East have protected it.

"There is no way we can be a security threat to the oil we have guarded for years, so specialised and additional security personnel should head to Kapedo and assure our people of security."

He said they won't allow trucks to leave until the President assure them of their security.

Other residents demanded employment as road marshals to ensure that livestock don't interfere with the smooth transportation of the oil.

Lokichar business people, who camped at Africa Camp Solution from Tuesday night, asked Tullow Oil and the government to ensure locals are prioritised when opportunities arise.

Led by Samuel Lomodo, they claimed that they have even been denied tenders to supply fuel for oil operations. They said the tender was awarded to a government parastatal.

"We want to ensure that drivers in the region

The protesters also demanded that the government give details of their five percent revenue share, which they want channeled to their bank accounts and not directed to development as some leaders want.

It was agreed that the public will get

75 percent through the national government, the county

20 percent and the local community

Turkana is the poorest county in Kenya; the Kenya National Statistics office says 88 percent of the people live below the poverty level, compared to 45 percent nationally.

Oil was discovered in Lokichar, 90 kilometres from Lodwar, in 2012, and most locals hope the start of output will accelerate development.

Woman Representative Joyce Emanikor and Turkana North MP Christopher Nakuleu for the government to address insecurity before getting into the oil business.