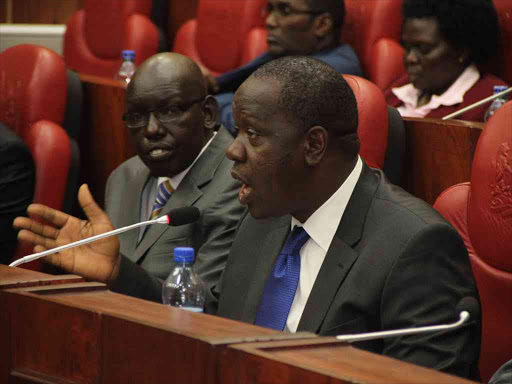 Interior CS Fred Matiang'i has failed to show up for the probing of contraband sugar for the second time.

The CS through a letter requested the committee to reschedule the probing to a later date.

He said he is involved in the EAC heads of state summit that is being hosted by President Uhuru Kenyatta.

The letter, dated June 26, 2018, and delivered through the Clerk of National Assembly, was signed by his principal secretary Karanja Kibicho.

The probe on the sugar scandal kicked off on Monday.

Cabinet Secretaries Mwangi Kiunjuri, Adan Mohammed, and Henry Rotich were put on the spot over the importation of sugar that has been a cause of concern for many Kenyans.

Matiang'i was the first CS to announce the presence in the country of sugar laced with mercury and copper about two weeks ago.

His counterpart Kiunjuri (Agriculture) during the Monday session blamed the National Treasury as the one which opened floodgates of contraband sugar after allowing duty-free importation.

Matiang'i's absence angered the committee members accusing him of lack of respect to the parliament.

The committee said that it was the CS who triggered the sugar issue and yet he is not willing to show up to shade light.

The committee later deliberated the issue and agreed that Matiangi should appear on Thursday at 8.30am, failure to which he will be summoned.