Senators accuse State of being vague on Cuban doctors deal 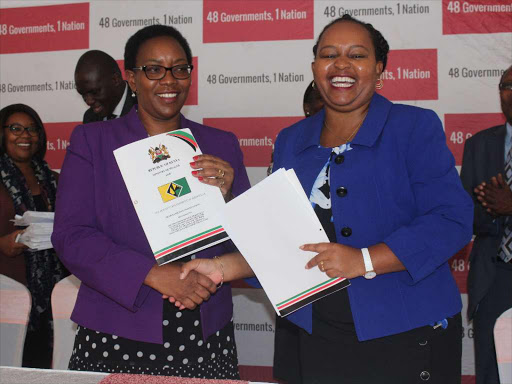 Cabinet secretary of health Mrs Sicily K Karuiki and governor of Kirinyaga Ann Waiguru at delta house Nairobi during the signing of the MOU on the Cuban doctors 14 May 2018./Kennedy Njeru

The Senate will summon Health CS Cecily Kariuki and council of governors to make a clarification on the Kenyan deal with Cuban doctors.

Senate majority leader Kipchumba Murkomen and his minority counterpart James Orengo on Thursday said they're investigating claims that the foreign doctors will be paid Sh1,000,000 a month.

On Friday Murkomen said, "We want to know is it true that the doctors will earn one million while Kenyan doctors who have all the qualifications earn Sh100,000. I believe this cannot be possible but the only way we can get to know the truth is if those who broke the deal are summoned to this house".

Murkomen (Elegeyo Marakwet) said initially they were told that the Cuban doctors are set to earn Sh390,270.

"Wheres we laud the government for negotiating a deal with the Cuban government seeking to improve our health sector, Mr speaker my heart is saddened that major policies touching on the devolved functions are done without reference to this house," he said.

The ministry of health said the doctors will be placed on Job Group S according to the salary structure effective July 2017 where the minimum salary stands at Sh390,270.

Murkomen said the Senate has never got a chance to debate on anything touching on health be it devolved functions or referral hospitals, a situation they accuse governors of abducting their responsibilities by sidelining them.

"Mr speaker the law is very clear that any every decision made by the council of governors or the summit must be debated in the Senate. How are we therefore supposed to debate an oversight issue that we have no say?" Murkomen paused.

He added, "the governors have a tendency of running to this house when their deals with national government go sore but they don't involve this house in brokering the deals. The truth be told that even me as the majority leader I do not understand the arrangement of the deal Mr speaker".

The legislator said the Senate Health committee chaired by Michael Mbito must summon the CS and the governors to shade light on what exactly is the deal with Cubans.

Last month while signing a MoU with the doctors, the government said it would spend at least Sh470 million annually on salaries of the doctors.

This means a total of Sh940 million in their two-year stay in the country as stipulated in their contracts. Additionally, the ministry will pay for there air tickets to the country.

His sentiments were echoed by Orengo who said the country might face a bigger problem with the deal.

"We are finding ourselves in a situation where all governments operations are put into questions with the same government becoming dysfunctional. If the majority leader who whines, dines and flies with those in power is not aware of such deals what about those of us on the other side," Orengo paused.

His Makueni counterpart Mutula Junior Kilonzo said there is a great need for the Senate to seriously interrogate health operations in the counties.'

Post a comment
WATCH: The latest videos from the Star
by By PATRICK VIDIJA @vidijapatrick
News
22 June 2018 - 18:00
Read The E-Paper